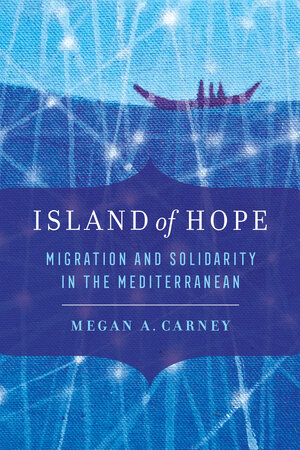 Island of Hope Migration and Solidarity in the Mediterranean

With thousands of migrants attempting the perilous maritime journey from North Africa to Europe each year, transnational migration is a defining feature of social life in the Mediterranean today. On the island of Sicily, where many migrants first arrive and ultimately remain, the contours of migrant reception and integration are frequently animated by broader concerns for human rights and social justice. Island of Hope sheds light on the emergence of social solidarity initiatives and networks forged between ordinary citizens and noncitizens who work together to improve local livelihoods and mobilize for radical political change. Based on years of ethnographic fieldwork with frontline communities in Sicily, anthropologist Megan A. Carney argues that such mobilizations hold significance not only for the rights of migrants, but for the material and affective well-being of society at large.

Megan A. Carney is Assistant Professor in the School of Anthropology and Director of the Center for Regional Food Studies at the University of Arizona. Her writing has appeared in The Hill, The Conversation, and Civil Eats. She is the author of the award-winning book The Unending Hunger.

"Megan Carney's work attempts to change our perspective on the issue of migration. Instead of approaching it as a problem or a crisis, she looks at migration as a site for potential hope and transformation. By centering on the lived experiences of people who perform 'solidarity work' in Sicily, the author explores the complexities and tensions that emerge from the encounter of different subjects—the migrants on one hand and the Sicilian 'solidarity workers' on the other—but also the opportunities for solidarity and change that emerge from this encounter."––Francesca Degiuli, author of Caring for a Living: Migrant Women, Aging Citizens, and Italian Families