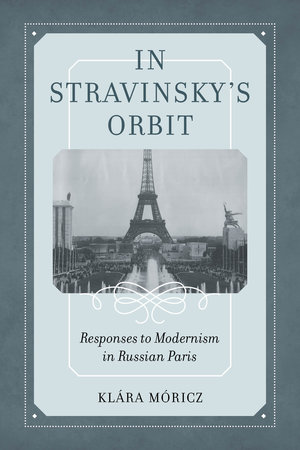 In Stravinsky's Orbit Responses to Modernism in Russian Paris

Their music reflected the conflict between a modernist narrative demanding innovation and a narrative of exile wedded to the preservation of prerevolutionary Russian culture. The emigrants’ and the Bolsheviks’ contrasting visions of Russia and its past collided frequently in the French capital, where the Soviets displayed their political and artistic products. Russian composers in Paris also had to reckon with Stravinsky’s disproportionate influence: if they succumbed to fashions dictated by their famous compatriot, they risked becoming epigones; if they kept to their old ways, they quickly became irrelevant. Although Stravinsky’s neoclassicism provided a seemingly neutral middle ground between innovation and nostalgia, it was also marked by the exilic experience. Móricz offers this unexplored context for Stravinsky’s neoclassicism, shedding new light on this infinitely elusive term.

Klára Móricz is the Joseph E. and Grace W. Valentine Professor of Music at Amherst College. She is the author of Jewish Identities: Nationalism, Racism, and Utopianism in Twentieth-Century Music, coeditor of Funeral Games in Honor of Arthur Vincent Lourié, and editor of volume 24 of the Béla Bartók Complete Critical Edition: Concerto for Orchestra.

"In Stravinsky’s Orbit puts the composer in his rightful place, both literally and metaphorically—not by downplaying his creative achievements, but by mapping the glittering constellation of Russian émigré artists who took up residence in interwar Paris. Klára Móricz is a deft guide to this milieu, helping us to see musical modernism in a new light."––Philip Ross Bullock, University of Oxford