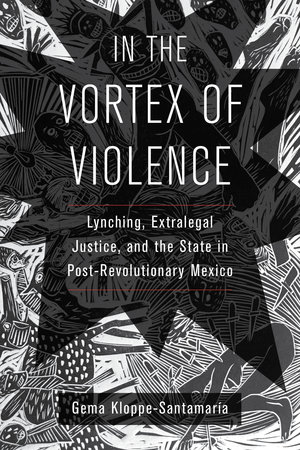 In the Vortex of Violence Lynching, Extralegal Justice, and the State in Post-Revolutionary Mexico

In the Vortex of Violence examines the uncharted history of lynching in post-revolutionary Mexico. Based on a collection of previously untapped sources, the book examines why lynching became a persistent practice during a period otherwise characterized by political stability and decreasing levels of violence. It explores how state formation processes, as well as religion, perceptions of crime, and mythical beliefs, contributed to shaping people’s understanding of lynching as a legitimate form of justice. Extending the history of lynching beyond the United States, this book offers key insights into the cultural, historical, and political reasons behind the violent phenomenon and its continued practice in Latin America today.

by Gema Kloppe-Santamaría, author of In the Vortex of Violence: Lynching, Extralegal Justice, and the State in Post-Revolutionary Mexico In November of 2004, three federal police officers were lynched in the neighborhood …

Gema Kloppe-Santamaría is Assistant Professor of Latin American History at Loyola University Chicago. She is the lead editor of Violence and Crime in Latin America: Representations and Politics and Human Security and Chronic Violence in Mexico: New Perspectives and Proposals from Below.

“Conceptually cogent, profoundly researched, and persuasively written, In the Vortex of Violence appraises the political, cultural, and moral motivations behind lynching for community stakeholders. It draws readers near the pain of brutal violence and unearths its meanings for wider processes of state-making, exclusion, and domination in twentieth-century Mexico. An admirable achievement!”—Wil G. Pansters, Professor of Social and Political Anthropology of Latin America, Utrecht University

“Gema Kloppe-Santamaría’s study of lynching in Mexico is one of the best books I have read in recent years. In the Vortex of Violence is superbly researched and of great value to historians studying mob violence in all parts of the world. In recent years a number of scholars have studied late-twentieth-century extralegal violence in Latin America, but this book distinguishes itself by its attention to history and the enduring cultural underpinnings of collective violence. Its author is particularly deft at connecting lynching to state formation while not neglecting local attitudes toward religion and witchcraft. Most importantly, she understands the great significance of the discourse surrounding the alleged crimes at the heart of lynching cases. As a historian of the United States, I found this book constantly led me to rethink my own ideas and approaches. Anyone who has wrestled with the difficult question of how to distinguish lynching from murder should study In the Vortex of Violence.”—William D. Carrigan, coauthor of Forgotten Dead: Mob Violence against Mexicans in the United States, 1848–1928

“In the Vortex of Violence is an engaging and highly original foray into lynchings—a particular feature of violence that undergirds the relationship between civil society and state structures in Mexico. Gema Kloppe-Santamaría argues that we must center lynchings in our analysis of state formation to grasp the scale of impunity rampant in Mexico today. She expertly shows that the violence in contemporary Mexico has deep historical roots. The work is at once highly accessible and deeply sophisticated.”—Gladys McCormick, Associate Professor in History and the Jay and Debe Moskowitz Chair in Mexico-US Relations, Syracuse University

Introduction
In the Name of Justice: Lynch Mobs and the State in Post-Revolutionary Mexico

1. Between Civilization and Barbarity
Lynching and State Formation in Post-Revolutionary Mexico

2. In the Name of Christ
Lynching and Religion in Post-Revolutionary Mexico

4. The Lynching of the Wicked
Fat Stealers, Bloodsuckers, and Witches in Post-Revolutionary Mexico

Conclusion
Lynching Past and Present: Notes on Mexico and Latin America’s Trajectory of Violence