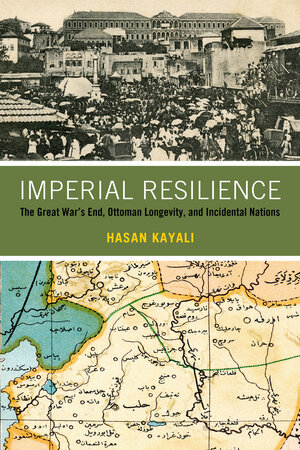 Imperial Resilience tells the story of the enduring Ottoman landscape of the modern Middle East's formative years from the end of the First World War in 1918 to the conclusion of the peace settlement for the empire in 1923. Hasan Kayali moves beyond both the well-known role that the First World War's victors played in reshaping the region's map and institutions and the strains of ethnonationalism in the empire's "Long War." Instead, Kayali crucially uncovers local actors' searches for geopolitical solutions and concomitant collective identities based on Islamic commonality. Instead of the certainties of the nation-states that emerged in the wake of the belated peace treaty of 1923, we see how the Ottoman Empire remained central in the mindset of leaders and popular groups, with long-lasting consequences.

Hasan Kayalı is the author of Arabs and Young Turks and is Professor of History at the University of California, San Diego.

"Imperial Resilience is a new and compelling way of conceiving the final years of the Ottoman Empire and the emergence of the nationally defined (but not necessarily nationally organized) states that emerged in its place in the Middle East. It is innovative in its approach but also builds on and benefits from a growing body of literature that has argued for the importance of appreciating the persistence of imperial institutions, conventions, and individuals in the post-imperial era. Hasan Kayalı, a respected authority on Ottoman-Arab relations, brings to bear the clarity and judgment of his considerable scholarly experience in this exciting new study."—Benjamin Fortna, author of The Circassian: A Life of Eşref Bay, Late Ottoman Insurgent and Special Agent

"Kayalı addresses a complex and important topic and manages to cover military, political history in a comprehensive and clear way, despite a diversity of issues involving Europe, the Ottoman Empire, and the Middle East, including Anatolia, during a period of great transition. The areas covered are vast and central to anyone interested in modern history. The book conveys the number of countries, superpowers, local rivals, changing heads of states, and armies and the results of the variety of treaty negotiations involved as clearly as I have seen. And notably, it does so from a different perspective than the abundant Eurocentric historical literature."––Leila Fawaz, author of A Land of Aching Hearts: The Middle East in the Great War


"Kayalı's compelling account of the neglected Turkish-Arab relationship in the transition from the Ottoman Empire to modern states of the Middle East lifts us above the stories that the respective nations tell about themselves. He also accounts for all the colonial and geopolitical moving pieces, while providing valuable clarity to students and new insights to scholars."––Christine M. Philliou, Turkey: A Past Against History
Read More >

1 • Unfolding of an Ottoman Project in the Age of Nation: The Quest to Preserve the Ottoman State
2 • Reversals of Fortune and Resilience: The Last Year of the Great War
3 • Anti-colonial Resistance and the Search for Self-Determination
4 • State Transformations: Anatolian Movement and the Fertile Crescent, 1920–1922
5 • Struggle for Redemption and Imperial Dissolution