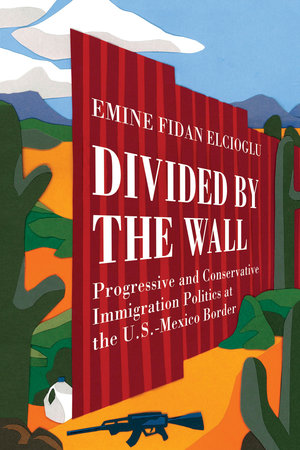 Divided by the Wall Progressive and Conservative Immigration Politics at the U.S.-Mexico Border

"This is an accessible book for anyone interested in immigration politics and social movements, stratification and identity politics. Elcioglu offers an important contribution to social movements and contentious politics studies by delving into the life stories and understanding both sides of the immigration debate through their own lens."

"Divided by the Wall is a must-read for scholars of political movements because of its vivid, thoughtful depiction of this phenomenon at the US-Mexico border."—Social Forces

"The analytical perspective and remarkable findings of Divided by the Wall open a dialogue among political sociologists who study social movements and political mobilization."

"Divided by the Wall has clearly succeeded in provoking important questions and opening new lines of investigation. Elcioglu sets a high standard for comparative ethnography of dueling social movements. The text is accessibly written and would be suitable for undergraduate and graduate courses on social movements, immigration, and ethnography. Students would likely find their engagement with the text to be a highlight of the term."

"This riveting book studies pro- and anti-immigrant stances together and mines the meanings of the juxtapositions. Its centering of government policies, especially policing, shows how profoundly the pro-immigration restriction positions attach themselves to the law, partly to wave away charges of racism. Conversely it shows how often and profoundly pro-immigrant groups array themselves against state power."—David R. Roediger, author of How Race Survived U.S. History?

"In this vivid ethnographic account of progressive and conservative activism at the Arizona border, Emine Fidan Elcioglu shows how these movements are about much more than immigration. She deftly illuminates how border activism is animated by gendered politics of whiteness and how privileged participants manage conflictual identities. This is a must read for anyone interested in immigration-focused movements and border issues."—Sharon Erickson Nepstad, Distinguished Professor of Sociology, University of New Mexico

"Deftly comparing the social composition, emotional motivations, and worldviews—especially with regard to the state—of activists on both sides of the immigration divide, Elcioglu makes a powerful contribution to the burgeoning ethnographic literature on white working-class nativism. Drawing on extensive fieldwork, her careful analysis illuminates the central political question of our time."—Ruth Milkman, author of Immigrant Labor and the New Precariat

"Who mobilizes for or against international migration in the United States? How and why they do so? What kind of experiences prompt them into action? Looking deeply and systematically, both to the right and to the left, Elcioglu unearths paradoxically opposing understandings of the state and dissects how these shared perceptions shape feelings and fears about others and how they sustain collective action. This is relational political ethnography at its best."—Javier Auyero, Professor of Sociology, University of Texas at Austin

Introduction: State Effects and the Politics
of Immigration in Arizona

PART I USING IMMIGRATION POLITICS TO REMAKE ONESELF
1. Arizona and the Making of an Ambiguous Border
2. Being Progressive, but Privileged
3. Being White, but Working Class