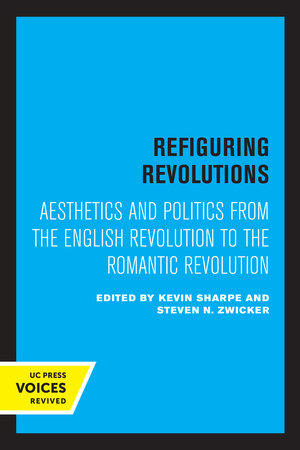 Refiguring Revolutions presents an original and interdisciplinary reassessment of the cultural and political history of England from 1649 to 1789. Bypassing conventional chronologies and traditional notions of disciplinary divides, editors Kevin Sharpe and Steven Zwicker frame a set of new agendas for, and suggest new approaches to, the study of seventeenth- and eighteenth-century England.

Customary periodization by dynasty and century obscures the aesthetic and cultural histories that were enacted between and even by the English Civil Wars and the French Revolution. The authors of the essays in this volume set about returning aesthetics to the center of the master narrative of politics. They focus on topics and moments that illuminate the connection between aesthetic issues of a private or public nature and political culture. Politics between the Puritan Revolution and the Romantic Revolution, these authors argue, was a set of social and aesthetic practices, a narrative of presentations, exchanges, and performances as much as it was a story of monarchies and ministries.

Kevin Sharpe is Professor of History at the University of Southampton, England. Author of The Personal Rule of Charles the First (1996), he coedited with Steven Zwicker the influential Politics of Discourse (California, 1987). Steven N. Zwicker, whose most recent book is Lines of Authority: Politics and English Literary Culture, 1649-1689 (1993), is Professor of English at Washington University, St. Louis.

"What is indeed striking is the degree to which the essays reveal a shared set of interests and adopt languages and concerns that reflect back and forth in stimulating ways."—Richard W. Kroll, author of The Material World