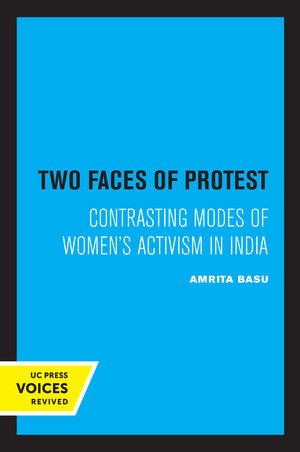 Drawing on case studies of the Communist Party of India (Marxist) in West Bengal and Shramik Sangathana in Maharashtra, this ground-breaking new work examines Indian women's political activism. Investigating institutional change at the state level and protest at the village level, Amrita Basu traces the paths of two kinds of political activism among these women. With insights gleaned from extensive interviews with activists, government officials, and ordinary men and women, she finds that militancy has been fueled by pronounced sexual and class cleavages combined with potentially rancorous ethnic division.

Thorough in its fieldwork, incisive in its political analysis, Two Faces of Protest offers a richly textured and sensitive view of women's political activism in the Third World.

Amrita Basu is Associate Professor of Political Science and Women's and Gender Studies at Amherst College.