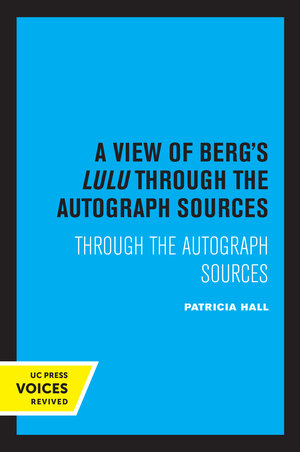 A View of Berg's Lulu Through the Autograph Sources

After 50 years of analysis we are only beginning to understand the quality and complexity of Alban Berg's most important twelve-tone work, the opera Lulu. Patricia Hall's new book represents a primary contribution to that understanding—the first detailed analysis of the sketches for the opera as well as other related autograph material and previously inaccessible correspondence to Berg.

In 1959, Berg's widow deposited the first of Berg's autograph manuscripts in the Austrian National Library. The complete collection of autographs for Lulu was made accessible to scholars in 1981, and a promising new phase in Lulu scholarship unfolded. Hall begins her study by examining the format and chronology of the sketches, and she demonstrates their unique potential to clarify aspects of Berg's compositional language. In each chapter Hall uses Berg's sketches to resolve a significant problem or controversy that has emerged in the study of Lulu. For example, Hall discusses the dramatic symbolism behind Berg's use of multiple roles and how these roles contribute to the large-scale structure of the opera. She also revises the commonly held view that Berg frequently invoked a free twelve-tone style.

Hall's innovative work suggests important techniques for understanding not only the sketches and manuscripts of Berg but also those of other twentieth-century composers.

Patricia Hall is Assistant Professor of Music at the University of California, Santa Barbara.

"Hall was the first to study this material whole and in such depth; the result of her study remains an important, and in many ways path-breaking, piece of work."—Douglas Jarman, author of The Music of Alban Berg