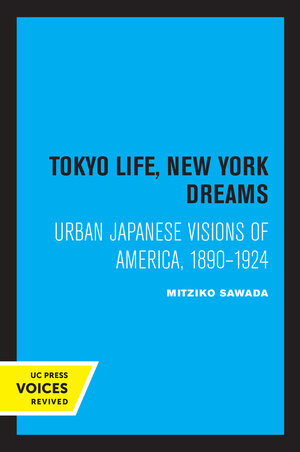 Tokyo Life, New York Dreams is a bicultural study focusing on Japanese immigrants in New York and the ideas they had about what they would find there. It is one of the first works to consider Japanese immigration to the East Coast, where immigrants were of a different class and social background from the laborers who came to the West Coast and Hawaii. Beginning with a portrait of immigrants' lives in New York City, Mitziko Sawada returns to Tokyo to examine the pre-immigration experience in depth, using rich sources of popular Japanese literature to trace the origins of immigrant perceptions of the U.S.

Along with discussions of economics and politics in Tokyo, Sawada explores the prevalent images, ideologies, social myths, and attitudes of late Meiji and Early Taisho Japan. Her lively narrative draws on guide books, magazines, success literature, and popular novels to illuminate the formation of ideas about work, class, gender relations, and freedom in American society. This study analyzes the Japanese construction of a mythic America, perceived as a homogeneous and exotic "other."

Mitziko Sawada is Dean of Multicultural Affairs and Visiting Associate Professor of History at Hampshire College.