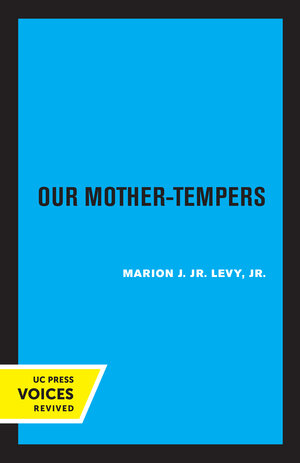 This book boldly states and deeply analyzes a commonplace observation about us all: our mothers play a powerful role in making us the kind of people we are. By the age of three, four, or five, virtually all children have learned to walk, talk, eat, sleep, control bodily functions, interact with other people, be male, or be female—insofar as these things are learned—from their mothers (or a mother surrogate who is female). Every mother has known and knows this. Most social analysts, according to the author, both know it and ignore it. If our mothers are asymmetrically influential in shaping our initial years, and our fathers usually in the background, what does it reveal about the social sources of human sex roles, including the universal precedence of males over females in all known societies?

These are fundamental, normative, and often deeply emotional matters. Professor Levy seeks to consider them in a scientific spirit, clear the path for better understandings of the role of mothers, and inspire new research on early socialization.

"Vintage Marion Levy: a mind-stirring sociological hypothesis on the large scale which is bound to evoke interest andcontroversy."—Robert Merton

"A needed challenge to scholars in many different fields."—Barbara Miller

"If the thesis of this book is valid, Marion Levy's mother has much to account for."—Marion Stanley Kelley, Jr.