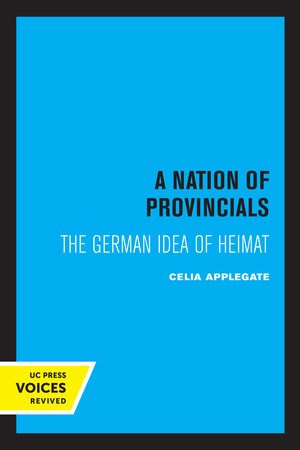 A Nation of Provincials The German Idea of Heimat

At the center of this pioneering work in modern European history is the German word Heimat—the homeland, the local place. Translations barely penetrate the meaning of the word, which has provided the emotional and ideological common ground for a variety of associations and individuals devoted to the cause of local preservation. Celia Applegate examines at both the national and regional levels the cultural meaning of Heimat and why it may be pivotal to the troubled and very timely question of German identity.

The ideas and activities clustered around Heimat shed new light particularly on problems of modernization. Instead of viewing the Germans as a dangerously anti-modern people, Applegate argues that they used the cultivation of Heimat to ground an abstract nationalism in their attachment to familiar places and to reconcile the modern industrial and urban world with the rural landscapes and customs they admired. Primarily a characteristic of the middle classes, love of Heimat constituted an alternative vision of German unity to the familiar aggressive, militaristic one. The Heimat vision of Germany emphasized cultural diversity and defined German identity by its internal members rather than its external enemies.

Applegate asks that we re-examine the continuities of German history from the perspective of the local places that made up Germany, rather than from that of prominent intellectuals or national policymakers. The local patriotism of Heimat activists emerges as an element of German culture that persisted across the great divides of 1918, 1933, and 1945. She also suggests that this attachment to a particular place is a feature of Europeans in general and is deserving of further attention.

Celia Applegate is Assistant Professor of History at the University of Rochester.

"This elegant and original study adds greatly to our understanding of national and regional identities in modern German history and the ways that these were constructed. It is imaginatively researched, intelligently argued, and written with panache. A Nation of Provincials is a major historical work that has much to contribute to larger contemporary debates about a 'usable' German past."—David Blackbourn, University of London

"This impeccably and thoroughly researched study is an excellent example of historical scholarship. Applegate has quite imaginatively used a wide variety of primary and secondary sources. This is a pioneering work that will stand alone in its field for some time."—Gary D. Stark, University of Texas, Arlington