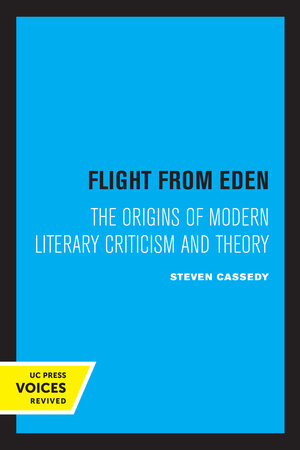 Flight from Eden The Origins of Modern Literary Criticism and Theory

It is traditionally assumed that modern literary criticism and theory came from France, and relatively recently. In fact, according to Cassedy, the entire modern critical consciousness was already formed by the early twentieth century in the minds of writers who were primarily neither professional critics nor philosophers, but poets. Some were French (Mallarmé, and Valéry); others were not (Rilke, Bely, and the Russian avant-garde poet Velimir Khlebnikov). In them we find the same Edenic faith, the same effort to abandon it, and the same failure of that effort.

Steven Cassedy is Associate Professor of Slavic and Comparative Literature at the University of California, San Diego. His Selected Essays of Andrey Bely is also available from California.

"German—and particularly French—sources of the revolution that has occurred in literary theory during the past thirty years have long been recognized. The Russian contribution to these events has been hinted at previously, but Cassedy documents in detail the extraordinary work of Potebnya, Veselovskij, and other figures virtually unknown in the West. . . . An important contribution to intellectual history and literary theory."—Michael Holquist, author of Dostoevsky and the Novel

"An astonishing number of complex movements and ideas—from Humboldt through Russian and French Symbolists to Heidegger, Husserl, Roman Jakobson and the deconstructors, from symbology to logology and iconology—begin to fit together in this wide-ranging and provocative book. . . . Cassedy's book will outrage some readers, delight others, and enlighten all."—Caryl Emerson, author of Boris Godunov: Transpositions of a Russian Theme