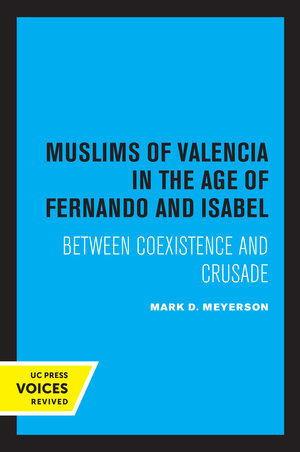 The kingdom of Valencia was home to Christian Spain's largest Muslim population during the reign of the Catholic Monarchs, Fernando and Isabel. How did Muslim-Christian coexistence in Valencia remain relatively stable in this volatile period that saw the establishment of the Spanish Inquisition, the Expulsion of the Jews, the conquest of Granada, and the conversion of the Muslims of Granada and Castile? In explanation, Mark Meyerson achieves the first thorough analysis of Fernando and Isabel's policy toward both Muslims and Jews. His findings will stimulate much discussion among Hispanists, Arabists, and historians.

Meyerson argues that the key to the persistence of Muslim-Christian coexistence in Valencia lies in the hitherto unexamined differences between the royal couple concerning matters of religion. More than a study of the minority policy of the Catholic Monarchs, however, The Muslims of Valencia is an exemplary analysis of the economic life of Valencia's Muslims and the complex institutional and social network that held them suspended "between coexistence and crusade."

Mark D. Meyerson is Assistant Professor of History at the University of Notre Dame.

"An exciting and magisterial contribution to Mudejar studies, it is also revisionist in its conclusions as to crown policies about these peoples."—Robert I. Burns, S.J., University of California, Los Angeles