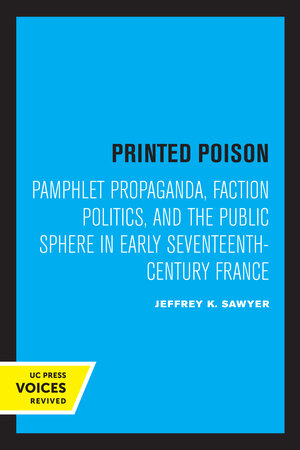 Combining a broad analysis of political culture with a particular focus on rhetoric and strategy, Jeffrey Sawyer analyzes the role of pamphlets in the political arena in seventeenth-century France. During the years 1614-1617 a series of conflicts occurred in France, resulting from the struggle for domination of Louis XIII's government. In response more than 1200 pamphlets—some printed in as many as eighteen editions—were produced and distributed. These pamphlets constituted the political press of the period, offering the only significant published source of news and commentary.

Sawyer examines key aspects of the impact of pamphleteering: the composition of the targeted public and the ways in which pamphlets were designed to affect its various segments, the interaction of pamphlet printing and political action at the court and provincial levels, and the strong connection between pamphlet content and assumptions on the one hand and the evolution of the French state on the other. His analysis provides new and valuable insights into the rhetoric and practice of politics.

Sawyer concludes that French political culture was shaped by the efforts of royal ministers to control political communication. The resulting distortions of public discourse facilitated a spectacular growth of royal power and monarchist ideology and influenced the subsequent history of French politics well into the Revolutionary era.

Jeffrey K. Sawyer is Assistant Professor of History at the University of Baltimore.