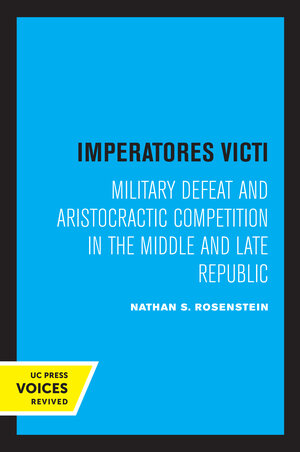 Given the intense competition among aristocrats seeking public office in the middle and late Roman Republic, one would expect that their persistent struggles for honor, glory, and power could have seriously undermined the state or damaged the cohesiveness of the ruling class. Rome in fact depended on aristocratic competition, since no professional bureaucracy directed public affairs and no salary was attached to any public office. But as Rosenstein adeptly shows, competition appears to have been surprisingly limited, in ways that curtailed the possible destructive effects of all-out contests between individuals.

Imperatores Victi examines one particularly striking case of such checks on competition. Military success at all times represented an abundant source of prestige and political strength at Rome. Generals who led armies to victory enjoyed a better-than-average chance of securing higher office upon their return from the field. Yet this study demonstrates that defeated generals were not barred from public office and in fact went on to win the Republic's most highly coveted and hotly contested offices in numbers virtually identical with those of their undefeated peers.

Rosenstein explores how this unexpected limit to competition functions, reviewing beliefs about the religious origins of defeat, assumptions about common soldiers' duties in battle, and definitions of honorable behavior of an aristocrat during a crisis. These perspectives were instrumental in shifting the onus of failure away from a general's person and in offering positive strategies a general might use to win glory and respect even in defeat and to silence potential critics among a failed general's peers. Such limits to competition had an impact on the larger problems of stability and coherence in the Republic and its political elite; these larger problems are discussed in the concluding chapter.

"A piece of work erudite and inspiring . . . for it abandons the well-trodden path and ventures into the difficult territory of Roman religion and its turbulent intersection with Roman politics. It is astounding that nobody has ever treated this subject systematically and in detail."—Jerzy Linderski, University of North Carolina