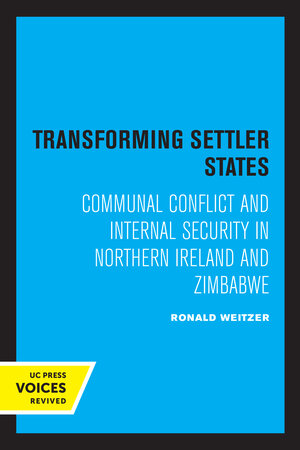 In the past two decades, several settler regimes have collapsed and others seem increasingly vulnerable. This study examines the rise and demise of two settler states with particular emphasis on the role of repressive institutions of law and order. Drawing on field research in Northern Ireland and Zimbabwe, Ronald Weitzer traces developments in internal security structures before and after major political transitions. He concludes that thoroughgoing transformation of a repressive security apparatus seems to be an essential, but often overlooked, precondition for genuine democracy.

In an instructive comparative analysis, Weitzer points out the divergent development of initially similar governmental systems. For instance, since independence in 1980, the government of Zimbabwe has retained and fortified basic features of the legal and organizational machinery of control inherited from the white Rhodesian state, and has used this apparatus to neutralize obstacles to the installation of a one-party state. In contrast, though liberalization is far from complete. The British government has succeeded in reforming important features of the old security system since the abrupt termination of Protestant, Unionist rule in Northern Ireland in 1972. The study makes a novel contribution to the scholarly literature on transitions from authoritarianism to democracy in its fresh emphasis on the pivotal role of police, military, and intelligence agencies in shaping political developments.