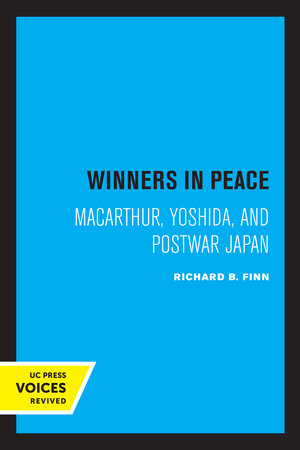 Singular for its breadth and balance, Winners in Peace chronicles the American Occupation of Japan, an episode that profoundly shaped the postwar world. Richard B. Finn, who participated in the Occupation as a young naval officer and diplomat, tells the full story of the activities from 1945 to 1952. He focuses on the two main actors, General Douglas MacArthur and Japanese Prime Minister Shigeru Yoshida, and details the era's major events, programs, and personalities, both American and Japanese.

Finn draws on an impressive range of sources—American, Japanese, British, and Australian—including interviews with nearly one hundred participants in the Occupation. He describes the war crimes trials, constitutional reforms, and American efforts to rebuild Japan. The work of George Kennan in making political stability and economic recovery the top goals of the United States became critical in the face of the developing Cold War.

Winners in Peace will aid our understanding of Japan today—its economic growth, its style of government, and the strong pacifist spirit of its people.

Richard B. Finn is Diplomat in Residence, American University. He was a United States Foreign Service officer in Japan from 1947 to 1954. About half of his thirty-two years in the State Department were devoted to work on Japan.