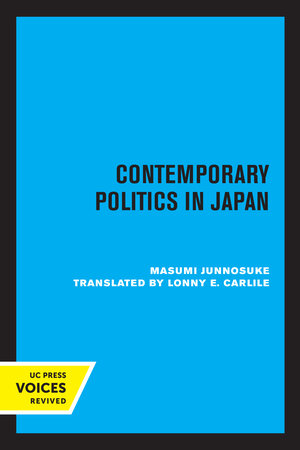 This study by one of Japan's foremost political scientists examines the unfolding relationship between the Liberal Democratic Party (LDP), the state, and the forces of industrialization in Japan from the 1950s through the 1980s. It is the only book in English to describe and analyze in detail Japan's political development during this critical period.

Masumi argues that Japan's rapid economic growth was promoted by an "iron triangle" among three actors—the LDP, the bureaucracy, and big business. This growth fueled the enormous social changes of the 1960s and 1970s, which in turn forced the transformation of the "iron triangle" and the basis of party power. In a final chapter, Masumi reflects on the end of LDP rule in 1993.

Masumi Junnosuke is Professor Emeritus in the School of Law at Tokyo Metropolitan University. He is the author of many books in Japanese and the coauthor of Postwar Politics in Japan, 1945-1955 (1985). Lonnie E. Carlile is Assistant Professor in the Center for Japanese Studies/Department of Asian Studies at the University of Hawaii at Manoa.