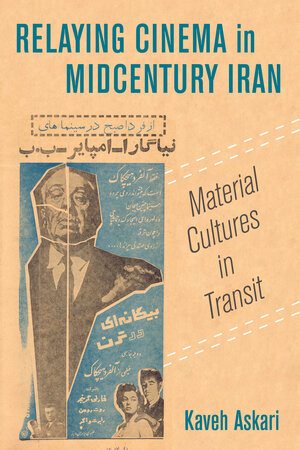 Relaying Cinema in Midcentury Iran investigates how the cultural translation of cinema has been shaped by the physical translation of its ephemera. Kaveh Askari examines film circulation and its effect on Iranian film culture in the period before foreign studios established official distribution channels and Iran became a notable site of world cinema. This transcultural history draws on cross-archival comparison of films, distributor memos, licensing contracts, advertising schemes, and audio recordings. Askari meticulously tracks the fragile and sometimes forgotten material of film as it circulated through the Middle East into Iran and shows how this material was rerouted, reengineered, and reimagined in the process.

UC Press is excited to share with you some new publications and recent highlights from the University of California Press’s Film and Media Studies list. UC Press has the oldest scholarly cinema …

Kaveh Askari is Associate Professor and Director of the Film Studies Program at Michigan State University. He is author of Making Movies into Art.

"Kaveh Askari tracks an intricate web of film itineraries that are fundamentally entangled and extend across the Global North and South. What emerges is a thick description of Iranian film culture as a dynamic site of transnational cinephilia, a playful and promiscuous love for cinema. This is an intellectually stimulating, methodologically inventive, and archivally rich work, and it will be a cherished contribution to the field of film studies."—Debashree Mukherjee, author of Bombay Hustle: Making Movies in a Colonial City

"Combining meticulous archival research on networks of media exchange with a bold argument about the limits of textual analysis, this book pioneers a method bound to transform how we read, interpret, and discuss national cinema. Rarely have I read a book that has made such an impression on me, and I have full confidence that this groundbreaking study will resonate widely across our discipline."—Michael Allan, Associate Professor of Comparative Literature, University of Oregon

"A ferociously original book that breaks new ground in the field of Iranian film studies. Eschewing the narratives of nationalism that have dominated the study of cinema in Iran, Askari instead offers a rich material history of celluloid film as it meandered across and within the country’s borders. He maps the multitude of invisible laborers, processes, routes, and technologies that situated the movies in Iran in the mid-twentieth century. Thanks to Askari’s rigorous research and eloquent prose, we can now see a world of cinema that was previously out of sight to international film distributors and scholars alike. Relaying Cinema in Midcentury Iran is certain to be a smash hit."—Blake Atwood, author of Underground: The Secret Life of Videocassettes in Iran

List of Illustrations
Acknowledgments
Note on Transliteration and Titles

1. An Afterlife for Junk Prints
Film Traffic and Regional Influence
Serials Out of Sync
Ironies of Appropriation

3. Collage Sound as Industrial Practice
Founding and the Found
Archiving, Assembly, and Recognition
Temp Love, Out of Sync
Relaying the Popular Song

4. The Anxious Exuberance of Tehran Noir
The Crime Thriller as Currency in the Press
Currency Disputes
Aesthetic Standards and Scarce Resources
Modularity and Fluency
Mixed Signals of Kin and Home

5. Eastern Boys and Failed Heroes
Year of The Heroes
Failures of The Heroes
Kimiai’s First Film Cycle
Sponsorship, Nostalgia, and Collecting
Under the Sign of Rio Bravo
Coda