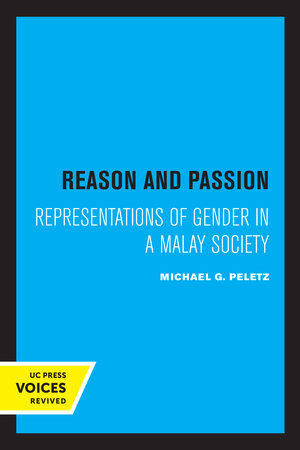 Reason and Passion Representations of Gender in a Malay Society

This book provides a historical and ethnographic examination of gender relations in Malay society, in particular in the well-known state of Negeri Sembilan, famous for its unusual mixture of Islam and matrilineal descent. Peletz analyzes the diverse ways in which the evocative, heavily gendered symbols of "reason" and "passion" are deployed by Malay Muslims. Unlike many studies of gender, this book elucidates the cultural and political processes implicated in the constitution of both feminine and masculine identity. It also scrutinizes the relationship between gender and kinship and weighs the role of ideology in everyday life.

Peletz insists on the importance of examining gender systems not as social isolates, but in relation to other patterns of hierarchy and social difference. His study is historical and comparative; it also explores the political economy of contested symbols and meanings. More than a treatise on gender and social change in a Malay society, this book presents a valuable and deeply interesting model for the analysis of gender and culture by addressing issues of hegemony and cultural domination at the heart of contemporary cultural studies.

Michael G. Peletz is Associate Professor of Anthropology and Director of the Asian Studies Program at Colgate University. He is the author of A Share of the Harvest: Kinship, Property, and Social History Among the Malays of Rembau (California, 1988) and coeditor of Bewitching Women, Pious Men: Gender and Body Politics in Southeast Asia (California, 1995).

"This book mixes aspects of 'old' and 'new' ethnography to powerful and persuasive effect: It is ethnographically rich, modestly (and appropriately) reflexive, and framed within a broad range of contemporary theoretical issues concerning gender and beyond. It is a pleasure to read, and will be enormously valuable (and important) for teaching as well."—Sherry Ortner, University of California, Berkeley

"This is the single best study of gender and culture that I know, whether in Southeast Asia or elsewhere."—Robert Hefner, editor of Conversion to Christianity