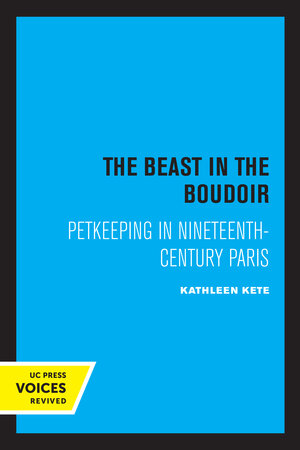 The Beast in the Boudoir Petkeeping in Nineteenth-Century Paris

Kathleen Kete's wise and witty examination of petkeeping in nineteenth-century Paris provides a unique window through which to view the lives of ordinary French people. She demonstrates how that cliché of modern life, the family dog, reveals the tensions that modernity created for the Parisian bourgeoisie.

Kete's study draws on a range of literary and archival sources, from dog-care books to veterinarians's records to Dumas's musings on his cat. The fad for aquariums, attitudes toward vivisection, the dread of rabies, the development of dog breeding—all are shown to reflect the ways middle-class people thought about their lives. Petkeeping, says Kete, was a way to imagine a better, more manageable version of the world—it relieved the pressures of contemporary life and improvised solutions to the intractable mesh that was post-Enlightenment France. The faithful, affectionate family dog became a counterpoint to the isolation of individualism and lack of community in urban life. By century's end, however, animals no longer represented the human condition with such potency, and even the irascible, autonomous cat had been rehabilitated into a creature of fidelity and affection.

Full of fascinating details, this innovative book will contribute to the way we understand culture and the creation of class.

"Kete uses relatively obscure material as a prism to refract important changes in sensibility. Her book offers a brilliant new way of understanding the traumas of modernity."—Thomas W. Laqueur, author of Making Sex