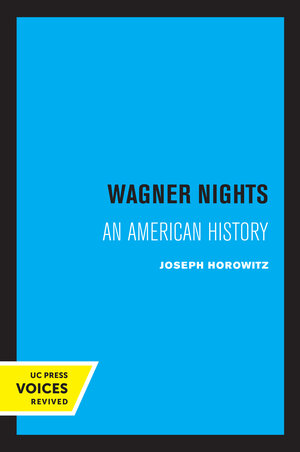 As never before or since, Richard Wagner's name dominated American music-making at the close of the nineteenth century. Europe, too, was obsessed with Wagner, but—as Joseph Horowitz shows in this first history of Wagnerism in the United States—the American obsession was unique.

The central figure in Wagner Nights is conductor Anton Seidl (1850-1898), a priestly and enigmatic personage in New York musical life. Seidl's own admirers included the women of the Brooklyn-based Seidl Society, who wore the letter "S" on their dresses. In the summers, Seidl conducted fourteen times a week at Brighton Beach, filling the three-thousand-seat music pavilion to capacity. The fact that most Wagnerites were women was a distinguishing feature of American Wagnerism and constituted a vital aspect of the fin-de-siècle ferment that anticipated the New American Woman.

Drawing on the work of such cultural historians as T. Jackson Lears and Lawrence Levine, Horowitz's lively history reveals an "Americanized" Wagner never documented before. An entertaining and startling read, a treasury of operatic lore, Wagner Nights offers an unprecedented revisionist history of American culture a century ago.

Joseph Horowitz is Executive Director of the Brooklyn Philharmonic Orchestra, the resident orchestra of the Brooklyn Academy of Music. From 1981 to 1994 he was program editor for the Kaufmann Concert Hall of the 92nd Street Y, where he also served as artistic advisor for the annual Schubertiade. He was music critic of the New York Times from 1976 to 1980. His three previous books are Conversations with Arrau, winner of an ASCAP-Deems Taylor Award; Understanding Toscanini: A Social History of American Concert Life, named one of the most distinguished books of 1987 by the National Book Critics Circle and now available from California in paperback; and The Ivory Trade: Piano Competitions and the Business of Music.

"Remarkably accurate and sensitive. . . . not only a book about Wagner in America, but an informative description of the development of musical taste in the United States from the end of the nineteenth century to the present day."—Daniel Barenboim, Music Director, Chicago Symphony Orchestra

"Horowitz adds another to his list of impressive books on American musical culture. Wagner Nights surpasses any previous writing on the history of American operatic culture in the Gilded Age. If only for Horowitz's resurrection of Anton Seidl—an unbelievably iconic figure in late nineteenth-century American musical life—his book would be of great value. And to have put Seidl, appropriately, in the context of the 'genteel tradition' of Victorian America, is a historical coup. Horowitz writes with solid scholarship and an extraordinarily fresh eye. This is a brilliant and compellingly readable account."—H. Wiley Hitchcock, author of Music in the United States

"A fascinating account of Anton Seidl, who became America's premier interpreter of Wagner, and of the women of the Seidl society who supported his work. In an era that was as complex and divided as our own, some sought to tame Wagner while others relished the intense emotions he evoked. This important story really bursts the seams of the existing paradigm of 'genteel' late nineteenth-century American culture."—Helen Lefkowitz Horowitz, author of Culture and the City