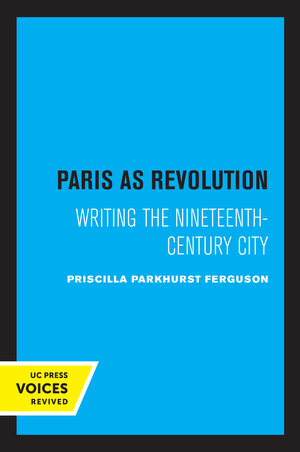 In nineteenth-century Paris, passionate involvement with revolution turned the city into an engrossing object of cultural speculation. For writers caught between an explosive past and a bewildering future, revolution offered a virtuoso metaphor by which the city could be known and a vital principle through which it could be portrayed.

In this engaging book, Priscilla Ferguson locates the originality and modernity of nineteenth-century French literature in the intersection of the city with revolution. A cultural geography, Paris as Revolution "reads" the nineteenth-century city not in literary works alone but across a broad spectrum of urban icons and narratives. Ferguson moves easily between literary and cultural history and between semiotic and sociological analysis to underscore the movement and change that fueled the powerful narratives defining the century, the city, and their literature. In her understanding and reconstruction of the guidebooks of Mercier, Hugo, Vallès, and others, alongside the novels of Flaubert, Hugo, Vallès, and Zola, Ferguson reveals that these works are themselves revolutionary performances, ones that challenged the modernizing city even as they transcribed its emergence.

Priscilla Parkhurst Ferguson is Professor of French and Sociology and Director of Graduate Studies for the Committee on Comparative Literature at Columbia University. She is the author of Literary France: The Making of a Culture (California, 1987; under the name Priscilla Parkhurst Clark).

"In this absolutely powerful and innovative book, Priscilla Parkhurst Ferguson illuminates the complex links between the Revolution of 1789, the different revolutions that took place in 19th-century Paris, and two aesthetic forms characteristic of the cultural discourses of modernity: panoramic journalism and the realist and historical novels authored by Balzac, Flaubert, Hugo, Zola, and Vallès. A work of cultural history with stimulating implications, Paris as Revolution is well-structured, carefully argued and problematized, and compelling in its scholarship."—Catherine Nesci, author of La Femme mode d'emploi

"A fascinating and richly suggestive essay on the cultural geography of nineteenth-century Paris. It is imaginatively conceived, broad in its reach, boldly interdisciplinary. Ferguson's success in combining literary criticism, historical interpretation and sociological analysis to reconstruct the shifting meanings given to the experiences of urbanization and revolution is most impressive."—Jonathan Beecher, author of Charles Fourier: The Visionary and His World