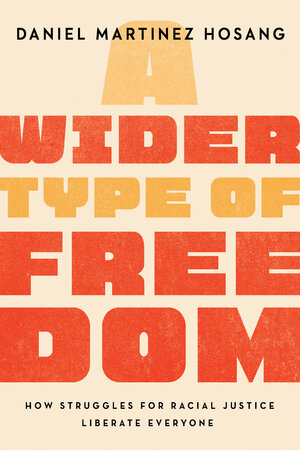 A sweeping history of transformative, radical, and abolitionist movements in the United States that places the struggle for racial justice at the center of universal liberation.

In Where Do We Go From Here? (1967), Dr. Martin Luther King, Jr., described racism as "a philosophy based on a contempt for life," a totalizing social theory that could only be confronted with an equally massive response, by "restructuring the whole of American society." A Wider Type of Freedom provides a survey of the truly transformative visions of racial justice in the United States, an often-hidden history that has produced conceptions of freedom and interdependence never envisioned in the nation's dominant political framework.

A Wider Type of Freedom brings together the stories of the social movements, intellectuals, artists, and cultural formations that have centered racial justice and the abolition of white supremacy as the foundation for a universal liberation. Daniel Martinez HoSang taps into moments across time and place to reveal the long driving force toward this vision of universal emancipation. From the abolition democracy of the nineteenth century and the struggle to end forced sterilizations, to domestic worker organizing campaigns and the twenty-first century's environmental justice movement, we see a bold, shared desire to realize the antithesis of "a philosophy based on a contempt for life." These movements emphasized transformations that would liberate everyone from the violence of militarism, labor exploitation, degradations of the body, and elite-dominated governance. Rather than seeking "equal rights" within such failed systems, they generated new visions that embraced human difference, vulnerability, and interdependence as central and productive facets of our collective experience.

Daniel Martinez HoSang is Associate Professor of Ethnicity, Race, and Migration at Yale University. He is the author of Racial Propositions: Ballot Initiatives and the Making of Postwar California and coauthor of Producers, Patriots, and Parasites: Race and the New Right-Wing Politics of Precarity.