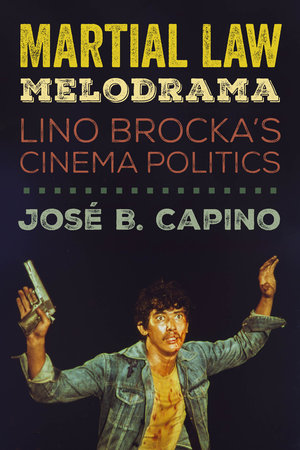 Lino Brocka (1939–1991) was one of Asia and the Global South’s most celebrated filmmakers. A versatile talent, he was at once a bankable director of genre movies, an internationally acclaimed auteur of social films, a pioneer of queer cinema, and an outspoken critic of Ferdinand Marcos’s autocratic regime. José B. Capino examines the figuration of politics in the Filipino director’s movies, illuminating their historical contexts, allegorical tropes, and social critiques. Combining eye-opening archival research with fresh interpretations of over fifteen of Brocka’s major and minor works, Martial Law Melodrama does more than reveal the breadth of his political vision. It also offers a timely lesson about popular cinema’s vital role in the struggle for democracy.

José B. Capino is Associate Professor of English and Cinema Studies at the University of Illinois, Urbana-Champaign. His first book, Dream Factories of a Former Colony, received the prize in cultural studies from the Association for Asian American Studies.

“A close examination of Brocka’s films, which considers them within the context of social and political trends, as well as within the framework of Brocka’s life and career.”—Cineaste

“This volume brings Lino Brocka, the man, his work, and his era, fully back to life. José Capino’s redefinition of melodrama, his conviction that it is futile to separate genre from ideology, and his insistence that popular forms may hold within their bounds the most transgressive of political stances, all combine to constitute a major critical intervention.”—B. Ruby Rich, author of New Queer Cinema

"Lino Brocka stands as one of the most significant directors of the last half of the twentieth century, putting Philippine cinema on the world stage in an unprecedented fashion. José Capino’s magnificent book puts Brocka at the center not only of the national politics of the Philippines under Marcos, but also of the geopolitical whirlwind sweeping world cinema in the waning years of the Cold War."—Gina Marchetti, author of Citing China: Politics, Postmodernism, and World Cinema?


"A rich and riveting book on a too-little-known chapter in world cinema. Confronting state authoritarianism and censorship within one of Asia’s liveliest popular film industries, Lino Brocka’s prolific prize-winning filmography as deftly read by Capino offers us a two-decade-long adventure, packed with stars, sexual transgressions, eruptions of bloody 'Marcosian moments,' and dreams of democracy. Capino’s passionate and authoritative account challenges received notions of political cinemas and their relation to pop genres. Here is the career of an artist up close, itself melodramatic and cut short in 1991, that is increasingly relevant to twenty-first-century culture and politics."—Thomas Waugh, Distinguished Professor Emeritus, Cinema, Concordia University
Read More >

1. The Country and the City: Social Melodrama and the Symptoms
of Authoritarian Rule
2. “A Thoroughly Different Kind of Mother”: Surrogate Autocrats,
Restive Youth, and the Maternal Melodrama
3. The Melodramatics of Crime: Film Noir in the Twilight of Martial Law
4. Tales of Unrelenting Misfortunes: Family Melodrama and the 1980s
Economic Crisis
5. Men in Revolt: Two Experiments in Political Cinema
6. A Dirty Affair: Political Melodramas of Democratization
7. Picturing “A Faggot’s Dilemma”: Sexuality, Politics, and a Commerce
in Queer Movies
Coda: Three Non-endings