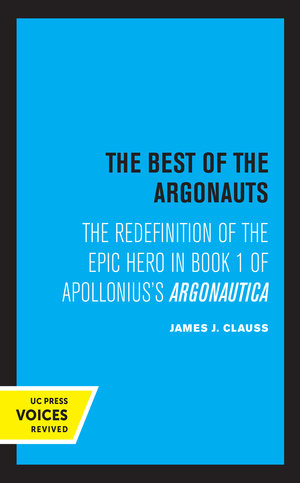 This revelatory exploration of Book One of the Argonautica rescues Jason from his status as the ineffectual hero of Apollonius' epic poem. James J. Clauss argues that by posing the question, "Who is the best of the Argonauts?" Apollonius redefines the epic hero and creates, in Jason, a man more realistic and less awesome than his Homeric predecessors, one who is vulnerable, dependent on the help of others, even morally questionable, yet ultimately successful.

In bringing Apollonius' "curious and demanding poem" to life, Clauss illuminates two features of the poet's narrative style: his ubiquitous allusions to the poetry of others, especially Homer, and the carefully balanced structural organization of his episodes. The poet's subtextual interplay is explored, as is his propensity for underscoring the manipulation of the poetry of others through ring composition.

James J. Clauss is Associate Professor of Classics at the University of Washington.