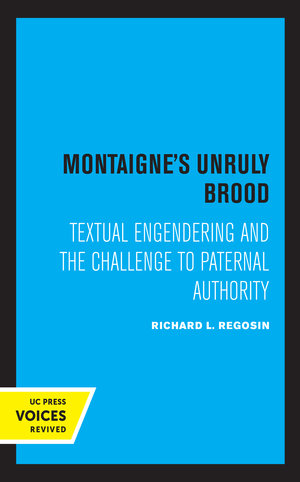 Perhaps as old as writing itself, the metaphor of the book as child has depicted textuality as an only son conceived to represent its father uniformly and to assure the integrity of his name. Richard L. Regosin demonstrates how Montaigne's Essais both departs from and challenges this conventional figure of textuality. He argues that Montaigne's writing is best described as a corpus of siblings with multiple faces and competing voices, a hybrid textuality inclined both to truth and dissimulation, to faithfulness and betrayal, to form and deformation. And he analyzes how this unruly, mixed brood also discloses a sexuality and gender dynamic in the Essais that is more conflicted than the traditional metaphor of literary paternity allows.

Regosin challenges traditional critics by showing how the "logic" of a faithful filial text is disrupted and how the writing self displaces the author's desire for mastery and totalization. He approaches the Essais from diverse critical and theoretical perspectives that provide new ground for understanding both Montaigne's complex textuality and the obtrusive reading that it simultaneously invites and resists. His analysis is informed by poststructuralist criticism, by reception theory, and by gender and feminist studies, yet at the same time he treats the Essais as a child of sixteenth-century Humanism and late Renaissance France. Regosin also examines Montaigne's self-proclaimed taste for Ovid and the role played by the seminal texts of self-representation and aesthetic conception (Narcissus and Pygmalion) and the myth of sexual metamorphosis (Iphis).

Richard L. Regosin is Professor of French at the University of California, Irvine, and the author of The Matter of My Book: Montaigne's Essais as the Book of the Self (California, 1977).

"Regosin explores meticulously, imaginatively, and critically the sinuosities of the Essais' self-reflexivity and metatextuality, both quintessential generative forces of this major Renaissance text. . . . A most important contribution to Montaigne studies."—Marcel Tetel, author of Montaigne

"This is a stimulating study of Montaigne's ambivalent figures of paternity, procreation, and generation. Regosin challenges the assumptions of traditional critics by showing how the 'logic' of a faithful filial text is disrupted and how the writing self displaces the author's desire for mastery and totalization. A rich, complex reading that combines careful textual scholarship with much critical imagination."—François Rigolot, author of Les Mètamorphoses de Montaigne 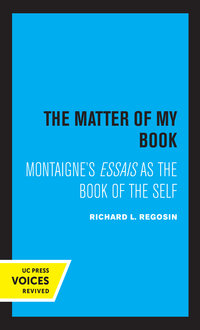 The Matter of My Book