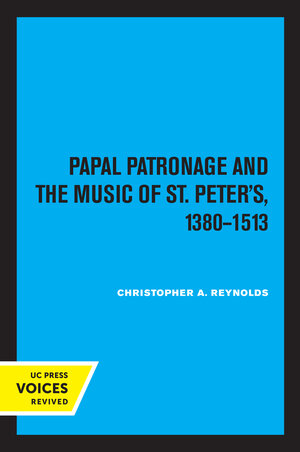 A new picture of music at the basilica of St. Peter's in the fifteenth century emerges in Christopher A. Reynolds's fascinating chronicle of this rich period of Italian musical history. Reynolds examines archival documents, musical styles, and issues of artistic patronage and cultural context in a fertile consideration of the ways historical and musical currents affected each other.

This work is both a historical account of performers and composers and an examination of how their music revealed their cultural values and educational backgrounds. Reynolds analyzes several anonymous masses copied at St. Peter's, proposing attributions that have biographical implications for the composers. Taken together, the archival records and the music sung at St. Peter's reveal a much clearer picture of musical life at the basilica than either source would alone. The contents of the St. Peter's choirbook help document musical life as surely as that musical life—insofar as it can be reconstructed from the archives—illumines the choirbook.

Christopher A. Reynolds is Professor of Music at the University of California, Davis. He is the founding editor of Beethoven Forum and a coeditor of I Tati Studies.

"A work of great importance in the field of early Renaissance Italian music, which documents the emergence of Rome as a major musical center."—Martin Picker, editor of The Motet Books of Andrea Antico

"This book presents an immense amount of new material about music at San Pietro, and by extension in Rome, during a crucial period in the history of Renaissance music. It will be warmly welcomed by specialists and will also be controversial because of the innovative attempt to group anonymous works into families much as art historians do with paintings. Reynolds is one of the few scholars I know who works comfortably in both the traditional historical mode and the new critical one."—Alejandro Planchart, author of The Repertory of Tropes at Winchester