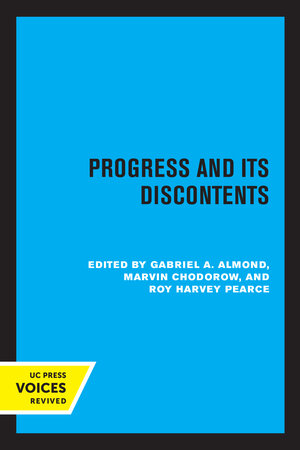 Progress and Its Discontents

Events of the past two decades have challenged many of the fundamental beliefs, institutions, and values of modern western culture--the culture of "progress." Are science and technology really progressive and beneficial? Have they led to the enhancement of welfare, greater hapiness, and moral immprovement? I s the continued growth of material productivity possible? Desirable? Are the institutions of progress viable?

Progress and Its Discontents assembles the views on progress of some of America's leading humanists, scientists, and social scientists. Citing disappointed expectations of progress in spheres from science to morals and politics, and the many problems created or left untouched by progress, the editors conclude that the term no longer refers to "an inevitable sequence of improvements" but rather to "an aspiration and compelling obligation."


This title is part of UC Press's Voices Revived program, which commemorates University of California Press’s mission to seek out and cultivate the brightest minds and give them voice, reach, and impact. Drawing on a backlist dating to 1893, Voices Revived makes high-quality, peer-reviewed scholarship accessible once again using print-on-demand technology. This title was originally published in 1982.