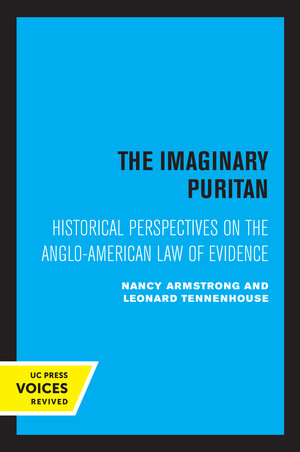 The Imaginary Puritan Literature, Intellectual Labor, and the Origins of Personal Life

Nancy Armstrong and Leonard Tennenhouse challenge traditional accounts of the origins of modern Anglo-American culture by focusing on the emergence of print culture in England and the North American colonies. They postulate a modern middle class that consisted of authors and intellectuals who literally wrote a new culture into being.

Milton's Paradise Lost marks the emergence of this new literacy. The authors show how Milton helped transform English culture into one of self-enclosed families made up of self-enclosed individuals. However, the authors point out that the popularity of Paradise Lost was matched by that of the Indian captivity narratives that flowed into England from the American colonies. Mary Rowlandson's account of her forcible separation from the culture of her origins stresses the ordinary person's ability to regain those lost origins, provided she remains truly English. In a colonial version of the Miltonic paradigm, Rowlandson sought to return to a family of individuals much like the one in Milton's depiction of the fallen world.

Thus the origin both of modern English culture and of the English novel are located in North America. American captivity narratives formulated the ideal of personal life that would be reproduced in the communities depicted by Defoe, Richardson, and later domestic fiction.

"A tour de force that reconceptualizes literary history and repositions British literature to claim the imperial and trans-Atlantic origins of the British novel. "—Carroll Smith-Rosenberg, author of Disorderly Conduct

"A very exciting piece of work, with important implications for how we conceive projects in literary, intellectual, and cultural history. . . . It is sure to be a controversial study, but it will get serious attention, not just as a study of 'novels' and texts but as a provocative account of English history and of models for studying history."—J. Paul Hunter, author of Before Novels