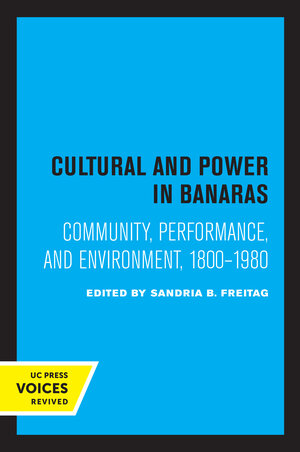 Culture and Power in Banaras Community, Performance, and Environment, 1800-1980

This collection of ten essays on Banaras, one of the largest urban centers in India's eastern Gangetic plain, is united by a common interest in examining everyday activities in order to learn about shared values and motivations, processes of identity formation, and self-conscious constructions of community.

Part One examines the performance genres that have drawn audiences from throughout the city. Part Two focuses on the areas of neighborhood, leisure, and work, examining the processes by which urban residents use a sense of identity to organize their activities and bring meaning to their lives. Part Three links these experiences within Banaras to a series of "larger worlds," ranging from language movements and political protests to disease ecology and regional environmental impact.

Banaras is a complex world, with differences in religion, caste, class, language, and popular culture; the diversity of these essays embraces those differences. It is a collection that will interest scholars and students of South Asia as well as anyone interested in comparative discussions of popular culture.

Sandria B. Freitag is the author of Collective Action and Community: Public Arenas and the Emergence of Communalism in North India, also published by the University of California Press.