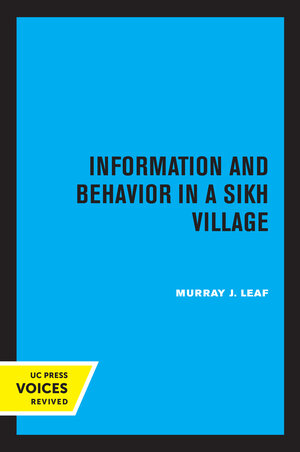 Information and Behavior in a Sikh Village Social Organization Reconsidered

This is the first major study of a Sikh community in Central Punjab to appear in the modern anthropological literature. Perhaps because this historically and economically important people and region have been so long neglected, they present certain important contradictions or paradoxes in terms of commonly accepted generalization about Indian village life. Thus, the villagers describe their Sikh religion as Hindu, yet insist that it forbids observance of caste restrictions. They are sincere in their beliefs and scrupulous in their performance to ritual, yet retain caste identifications and in certain contexts use caste terms for address. They have a strong factional organization, but it cuts across both kin and caste lines; moreover, many villagers remain aloof from factions, and those sho do belong frequently "forget" their quarrels and cooperate. Finally, the villagers are intensely concerned with trade and profit-making, yet resort ot many practices in a labor-intensive system that scholars have termed characteristic of a "subsistence" or "traditional" economy as distinct from a "market" or a "traditional" one. Instead of attempting to resolve these contradictions or to attribute them to a process of social breakdown, Leaf takes the view that they represent a stable, pervasive condition of social life. He capitalizes on their clarity in a particular village to draw attention to two elements of social theory that he regards as of general importance. His overall strategy of analysis places each seemingly contradictory element in its proper context, and then ascertains how these contexts are related to one another and to the behavior of the villagers. The first of the theoretical concepts that he develops for this purpose is a modified version of the idea of a "message source," used in information theory, permitting observation and isolation of socially defined conventions that result from behavior and affect it in turn. The second concept is a view of behavior as individual actions that respond to such social constraints, obtain support, and ultimately feed back into the social system--a cyclical model of social communication on an individual level. Use of these two concepts sets aside "total system theory," which has attracted mounting criticism by social and cultural anthropologists, in favor of what may be termed a "multiple system theory." Two important practical results of this shift in perspective are general heightening of empirical accuracy of analysis and an enhance insights into the ways that dynamica change, cooperation, and competition inhere in all social organization. This title is part of UC Press's Voices Revived program, which commemorates University of California Press's mission to seek out and cultivate the brightest minds and give them voice, reach, and impact. Drawing on a backlist dating to 1893, Voices Revived makes high-quality, peer-reviewed scholarship accessible once again using print-on-demand technology. This title was originally published in 1972.

Murray J. Leaf is Professor of Anthropology and Political Economy at The University of Texas at Dallas.