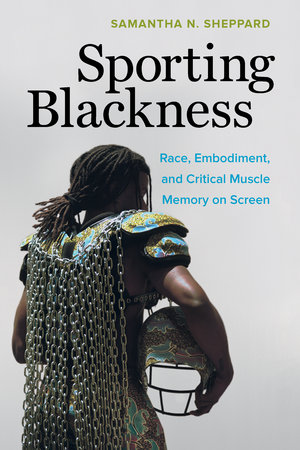 This guest post is part of our #SCMS2021 conference series. Visit our virtual exhibit to learn more. In this video, scholar Samantha Sheppard offers a sneak peek at her book, Sporting Blackness: Race, Embodiment, …

A Conversation with Samantha Sheppard, author of Sporting Blackness

This interview was originally published in Film Quarterly. Sam Sheppard is the author of Sporting Blackness: Race, Embodiment, and Critical Muscle Memory on Screen. Sheppard is the Mary Armstrong Meduski ’80 Assistant …

"Sheppard’s exploration of documentary sports films connects to how audiences view and understand contemporary Black athletes’ public articulations of dissent. Highlighting the real and perceived representations of Blackness expressed through film allows a recognition of the fundamental response to racial bias and antagonism that pervade sports; it also foregrounds the ways these portrayals articulate resistance to racial injustices."—Public Books

"Sporting Blackness, with its incisive close readings and its exciting weave of film-phenomenology, critical race theory and more, is an exemplary work of film studies that must surely influence much work to come."—Visual Studies

"Sporting Blackness is sure to be a touchstone in the rising tide of scholarship on the nexus of media, sport, culture, and power.  It invents and introduces several concepts—particularly 'critical muscle memory'—that will productively reverberate across the fields that this excellent interdisciplinary book puts into conversation."––Travis Vogan, author of ABC Sports: The Rise and Fall of Network Sports Television