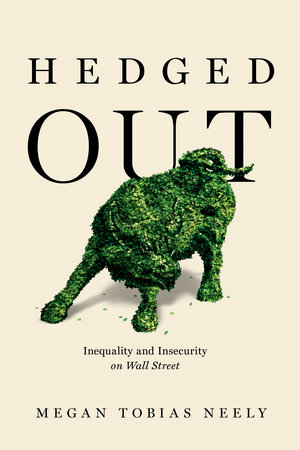 Hedged Out Inequality and Insecurity on Wall Street

A former hedge fund worker takes an ethnographic approach to Wall Street to expose who wins, who loses, and why inequality endures.

Who do you think of when you imagine a hedge fund manager? A greedy fraudster, a visionary entrepreneur, a wolf of Wall Street? These tropes capture the public imagination of a successful hedge fund manager. But behind the designer suits, helicopter commutes, and illicit pursuits are the everyday stories of people who work in the hedge fund industry—many of whom don’t realize they fall within the “1 percent” that drives the divide between the richest and the rest. With Hedged Out, sociologist and former hedge fund analyst Megan Tobias Neely gives readers an outsider’s insider perspective on Wall Street and its enduring culture of inequality.

Hedged Out dives into the upper echelons of Wall Street, where elite White masculinity is the standard measure for the capacity to manage risk and insecurity. Facing an unpredictable and risky stock market, hedge fund workers protect their interests by working long hours and building tight-knit networks with people who look and behave like them. Using ethnographic vignettes and her own industry experience, Neely showcases the voices of managers and other workers to illustrate how this industry of politically mobilized elites excludes people on the basis of race, class, and gender. Neely shows how this system of elite power and privilege not only sustains itself but builds over time as the beneficiaries concentrate their resources. Hedged Out explains why the hedge fund industry generates extreme wealth, why mostly White men benefit, and why reforming Wall Street will create a more equal society.

Megan Tobias Neely is Assistant Professor in the Department of Organization at Copenhagen Business School and coauthor of Divested: Inequality in the Age of Finance.

"Megan Neely uses rigorous social science and clear prose to pull back the curtain on the hedge fund industry. The result is a beautiful explanation of the intertwining of power and wealth with whiteness and masculinity. Neely forces us to grapple with the ugliness of today's Inequality, all the while offering us some hope by suggesting some pathways to transformation."—Shamus R. Khan, author of Privilege: The Making of an Adolescent Elite at St. Paul's School

"Hedged Out is the first scholarly book to provide an in-depth view of the social world of hedge funds, with cutting edge interview and ethnographic data. The central concept of 'hedged out' exposes the boundaries within hedge funds that explain why women and racial minorities are often left out of a highly lucrative and powerful industry that captures an elitist, counter-culture to Wall Street. This work is ambitious in scope, engaging, and a page turner that will appeal to a wide audience."—Kimberly Kay Hoang, Associate Professor of Sociology, University of Chicago, and author of Dealing in Desire

"This book will add to our understanding of elites and high status groups in society."—Adia Harvey Wingfield, Mary Tileston Hemenway Professor of Arts and Sciences at Washington University in St. Louis