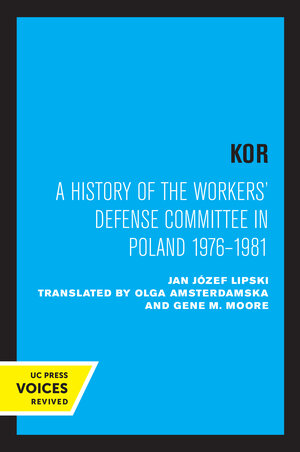 The signing of the Gdansk Agreements in August 1980 signaled the birth of the Solidarity independent trae union movement. The sixteen months that followed until the December 1981 declaration of martial law remain one of the most fascinating chapter in the history of communist states. But the events of August 1980 did not materialize from thin air. The groundwork for Solidarity was prepared five years before when a group of dissident intellectuals gathered to boldly proclaim their solidarity with persecuted workers at Random and Ursus. This group called itself the Komitet Obrony Robotnikow (KOR) or the Worker's Defense Committee. What was KOR? What were the social and political circumstances that lead to its formation? And how did it presage a movement that would come to symbolize the hopes of a whole generation of Poles? The answers to these questions lie in the rare insights provided by one of Poland's most respected historians, Jan Jozef Lipski, who was also a found and active member of KOR. His book, translated from the Polish, is a meticulously detailed, insider's account of KOR from its formation in 1976 to its dissolution of 1981 when it was subsumed by the more powerful movement of mass, organized protest, Solidarity. The history of KOR is painted on the broad canvass of Polish society, in a manner which sheds light on the roles of other actors--workers, peasants, government officials, the Catholic Church, the Soviet Union--who also had a hand in shaping events during this period. KOR: A History of the Workers' Defense Committee in Poland is a work of first-rate importance unlike any other published in the West. It provides a deep insight into the origins of events in Poland, and will also inform those intersted in the process of liberation elsewhere in Eastern Europe. Although written with a historian's attention to detail and objectivity, it is a riveting work of sustained dramatic tension. For Lipski is a dissident who writes about Poland from Poland and the history he writes about is till in the making. This title is part of UC Press's Voices Revived program, which commemorates University of California Press's mission to seek out and cultivate the brightest minds and give them voice, reach, and impact. Drawing on a backlist dating to 1893, Voices Revived makes high-quality, peer-reviewed scholarship accessible once again using print-on-demand technology. This title was originally published in 1985.

Jan Józef Lipski is a prominent historian, literary critic, and essayist who lives in Poland. A founding member of KOR and later a Solidarity activist, he has been arrested serval times for antigovernment activities. His publications have bene banned in Poland for several years.