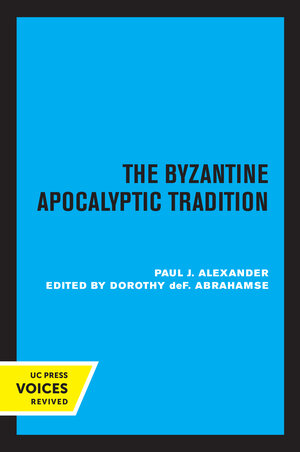 Throughout Christian history, apocalyptic visions of the approaching end of time have provided a persistent and enigmatic theme for history and prophecy. Apocalyptic literature played a particularly important role in the medieval world, where legends of the Antichrist, Gog and Magog, and the Last Roman Emperor were widely circulated. Although scholars have long recognized that a body of Byzantine prophetic literature served as the source for these ideas, the Byzantine textual tradition, its sources, and the way in which it was transmitted to the West have neve been thoroughly understood. For more than fifteen years prior to his death in 1977, Paul J. Alexander devoted his energies to the clarification of the Byzantine apocalyptic tradition. These studies, left uncompleted at his death, trace the development of a textual tradition that passed from Syriac through Greek to Slavonic and Latin literature. Using a combination of philological and historical detection, the author establishes the time, place, and circumstances of composition for each of the major surviving texts, identifying lost works known only through descriptions. In showing how Byzantine prophecy served as a bridge between ancient eschatological works and the medieval West, Alexander demonstrates that apocalyptic literature represents a creative source for the expression of political and religious thought in the medieval world. This title is part of UC Press's Voices Revived program, which commemorates University of California Press's mission to seek out and cultivate the brightest minds and give them voice, reach, and impact. Drawing on a backlist dating to 1893, Voices Revived makes high-quality, peer-reviewed scholarship accessible once again using print-on-demand technology. This title was originally published in 1985.

"Paul Alexander had a fine eye for the tensions, the incoherences, the sense of fragility that lay beneath the confident surface of the Byzantine state. What he has written on Apocalyptic, therefore, is not merely a set of interesting studies dating and providing a setting for vaguely disreputable rumblings: it is a new view of Byzantium and its underworld." --Peter Brown "This is a very important book, setting out Professor Alexander's final conclusions on a group of Apocalyptic texts that have never been completely analyzed in relation to all the others. . . . Every stage in what are often intricate discussions of complex material is argued with characteristic care, clarity, and precise scholarship." --Marjorie Reeves