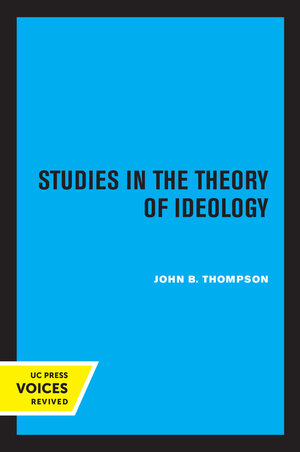 Studies in the Theory of Ideology

The study of ideology has traditionally been concerned not only with political ideas and doctrines, but also with the ways in which social relations are sustained through the representation of institutions and events. These traditional concerns have been transformed in recent years by investigations into the nature of language and its role in social life. Exploring the links between language and ideology has become one of the most pressing tasks of social and political analysis. In this volume John B. Thompson examines some of the outstanding contemporary contributions to the study of ideology. He focuses primarily on European social theorists and philosophers, providing concise and critical appraisals of their work. In addition to asessing the contributions of well-known thinkers, such as Jurgen Habermas and Paul Ricoeur, Thompson introduces the reader to a rich variety of authors who habe been neglected in the English-speaking world: Cornelius Castoriadis, Claude Lefort, Pierre Bourdieu, Michel Pecheux, Jean Pierre Faye. This work of these authors ia analyzed with a constructive aim: through a sympathetic assessment of their views, Thompson formulates the elements of a novel account of ideology. By addressing substantive and methodological issues as well as abstract questions of justification and critique, this account seeks to integrate sociological and philosophical considerations in a unified framework for the analysis of ideology. Studies in the Theory of Ideology will be essential reading for anyone intersted in the most important developments in European philosophy and modern social thought. This title is part of UC Press's Voices Revived program, which commemorates University of California Press's mission to seek out and cultivate the brightest minds and give them voice, reach, and impact. Drawing on a backlist dating to 1893, Voices Revived makes high-quality, peer-reviewed scholarship accessible once again using print-on-demand technology. This title was originally published in 1984.

John B. Thompson is Professor of Sociology at the University of Cambridge and an Emeritus Fellow of Jesus College.

"I regard this work as of the highest importance. Thompson has an awesome knowledge of the treatments of the question of ideology and of the theoretical literature that is relevant to a discussion of that problem. HIs expositions are clear and evenhanded, both sympathetic to the author's projects and constructively critical . . . This book is the finest treatment I know of the religion of recent linguistic and social theory to the question of ideology." --Mark Poster, University of California