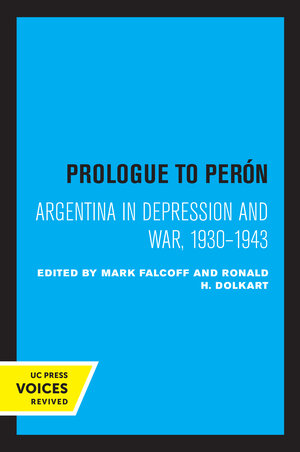 Prologue to Perón Argentina in Depression and War, 1930–1943

Since 1943 the personality and legend of General Juan Domingo Peron have towered over the Argentine Republic. Yet until 1930 Argentina was widely regarded as the best example of democracy and prosperity on a politically turbulent and economically underdeveloped continent. The present collection of articles by American and Argentine scholars examines the thirteen critical years that separated the "old" Argentina from the "new," and made possible the rise of one of the most powerful dictators in Latin America. In a little over a decade wracked by depression and war, political democracy in Argentina collapsed and the landed aristocracy was restored to power; the traditional relationship between the British and Argentine economies deteriorated and no satisfactory alternative was found; a generalized disillusionment and pessimism led to a fascination by intellectuals with authoritarian ideologies; a new "nationalistic" consciousness became increasingly evident in films, radio, and popular music; and social and demographic changes produced the constituency for a messianic populism. This volume thus identifies the symptoms that eventually resulted into the eleven year reign and twenty year cult of Peronismo, symptoms which strongly influence the course of events in present-day Argentina.  This title is part of UC Press's Voices Revived program, which commemorates University of California Press's mission to seek out and cultivate the brightest minds and give them voice, reach, and impact. Drawing on a backlist dating to 1893, Voices Revived makes high-quality, peer-reviewed scholarship accessible once again using print-on-demand technology. This title was originally published in 1975.

Mark Falcoff is a Fellow Emeritus at the American Enterprise Institute. Ronald H. Dolkart is a Professor at California State College, Bakersfield.