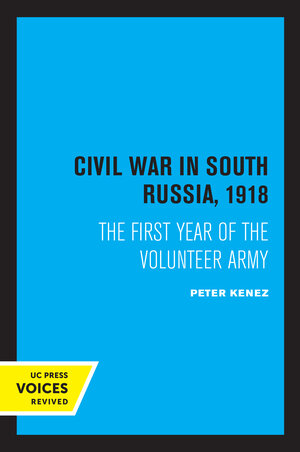 Civil War in South Russia, 1918 The First Year of the Volunteer Army

The Soviet Union was created as uch by the Civil War as by the revolutions of 1917; indeed, the revolutions and hte struggle which followed them are inseparable. Perhaps communism in Russia would have evolved differently had the bitter necessities of the Civil War not force the regime to develop features which had nothing to do with the Marxist ideology. Aside from the obvious historical significance of the Civil War, it is also a subject with great intrinsic interest: modern European history provides no better example of anarchy and its effects on social institutions and on human beings. The approach which is followed her is tha of a case study. Extrapolating from one part of Russia to the entire country is perhaps the best way to become aware of the many different issues that were at stake and of the difficulty in reducing the problems of the Civil War to simple formulae. South Russia is of special interest because it is a microcosm in which one can see most of the ills of Russia and because the events there were of great importance: it was in South Russia that foreign intervention assumed greatest magnitude; there the Whites put in their field their most substantial and persistent armies; and perhaps nowhere else di the anti-Bolshevik movement suffer more from dissension and from competing claims of national minorities. Kenez contends that the events of 1918 contained the seeds of ultimate disaster for the Whites.While the soldiers of the Volunteer Army showed exceptional valor and the generals proved themselves able military leaders, they failed politically. Because Denikin and his fellow leaders wrongly believed that politics could simply be avoided, they did not develop a positive program. They also failed to bring unity to eh anti-Bolshevik camp. It would have required a common ideology and exceptional wisdom to rise above the petty issues which separated the competing anti-Bolshevik groups, and the leader of the Whites processed neither. This title is part of UC Press's Voices Revived program, which commemorates University of California Press's mission to seek out and cultivate the brightest minds and give them voice, reach, and impact. Drawing on a backlist dating to 1893, Voices Revived makes high-quality, peer-reviewed scholarship accessible once again using print-on-demand technology. This title was originally published in 1971.

Peter Kenez is Professor Emeritus of History at the University of California, Santa Cruz.