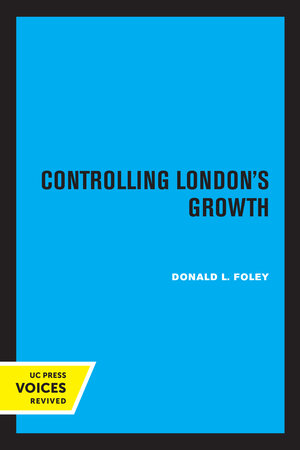 The story recounted here--that of efforts in recent years to plan for Greater London--is both unique and important. It concerns a world metropolis that, faced with an urgent need to rebuild its war-damaged central areas while still at war, prepared a notable set of special plans. And it describes subsequent vigorous efforts to carry these plans into effect. The London record is singularly impressive, unmatched by metropolitan planning efforts elsewhere. It has implications for metropolitan areas in other countries that are seeking solutions to comparable problems--problems reflecting unanticipated growth, technological and functional change, governmental chaos, and the reformulation of social requirements. Foley presents the first comprehensive factual analysis--British or otherwise--of the London planning experience. He offeres and original, sophisticated discussion of the social doctrine incorporated in the plans, and explains its emphasis on the principle of "containing" metropolitan London. He examines the context within which this doctrine emerged, investigates the suitability of this doctrine in the light of subsequent developments, and discusses possibilities for a fresh look at the main planning policies for Greater London. His approach gives the book depth without turning it into a specialized academic treatise. It speaks directly to thoughtful city-dwellers who are concerned to control rather than to be controlled by their environment. This title is part of UC Press's Voices Revived program, which commemorates University of California Press's mission to seek out and cultivate the brightest minds and give them voice, reach, and impact. Drawing on a backlist dating to 1893, Voices Revived makes high-quality, peer-reviewed scholarship accessible once again using print-on-demand technology. This title was originally published in 1963.

Donald L. Foley was Professor Emeritus of City and Regional Planning at the University of California, Berkeley.