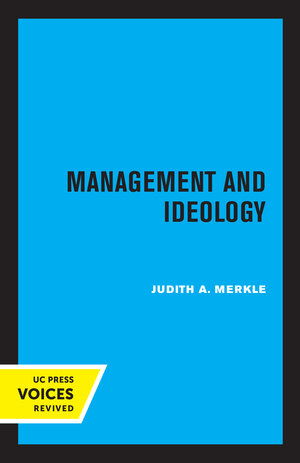 Management and Ideology The Legacy of the International Scientific Management Movement

From its obscure beginning as a system for organizing machine shops, Scientific Management has grown into the major technocratic ideology of the twentieth century. Its development and international diffusion have influenced industrial productivity, the social fabric of industrial society, and even the nature of government. In this study of the movement's growth, Merkle compares the writings of the American, German, French, British, and Soviet vanguards of Scientific Management and finds that those who advocated efficiency engineering were considerably more than pragmatists seeking immediate technical solutions to production problems. Rather, they were visionaries who sought to reconcile class conflict, restructure government, and create a universal technocratic utopia by achieving efficient mass production and rationalized distribution. The call for a "mental revolution," which permeates their writings, found sympathizers among capitalists and socialists alike; that revolution affected not only the structure of modern industrialism but also the organization of the state itself. This title is part of UC Press's Voices Revived program, which commemorates University of California Press's mission to seek out and cultivate the brightest minds and give them voice, reach, and impact. Drawing on a backlist dating to 1893, Voices Revived makes high-quality, peer-reviewed scholarship accessible once again using print-on-demand technology. This title was originally published in 1980.

Judith A. Merkle was Associate Professor of Political Science at the University of Oregon.