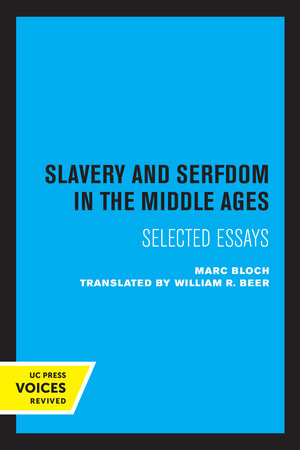 Slavery and Serfdom in the Middle Ages Selected Essays

Marc Bloch was one of the founders of social history, if by that is meant the history of social organization and relations to contrast to the more conventional histories of political elites and diplomatic relations. His great monographs in medieval history are well known, but his original articles have been difficult to obtain. The present collection of essays explores the dimensions of servitude in medieval Europe. The typical political relations of that era were those of feudalism--the hierarchical relations of juridically free men. The feudal superstructure was based on a foundation of unfree masses composed of people of differing degrees of servility. In these articles Marc Bloch focussed on the heterogeneous world of slaves and serfs, concertrating particularly on the causes for its growth in the Carolingian period and its decline in the thirteenth century. This title is part of UC Press's Voices Revived program, which commemorates University of California Press's mission to seek out and cultivate the brightest minds and give them voice, reach, and impact. Drawing on a backlist dating to 1893, Voices Revived makes high-quality, peer-reviewed scholarship accessible once again using print-on-demand technology. This title was originally published in 1975.

Marc Bloch, one of the great historians of our time, was born at Lyons in 1886 and educated at the Ecole Normale in Paris. He was for many years Professor of Medieval History in the University of Strasbourg before being called in 1936 to the Chair of Economic History at the Sorbonne. He fought in both World Wars, volunteering for active service in 1939 when he was already fifty0three. After the fall of France in 1940 he went to the South, where he taught successively at the Universities of Clermont-Ferrand and Montpellier. When the South too was occupied he joined the Resistance, but was caught by the Gestapo, tortured, and finally shot in the neighborhood of Lyons in June 1944.