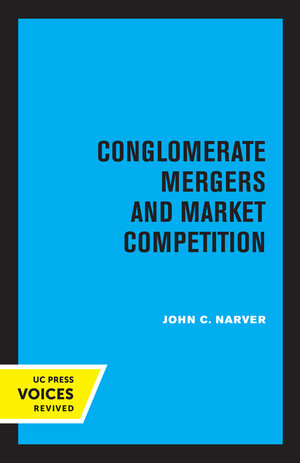 Business mergers are nowadays much in fashion and in the news, but relatively litte is known about their effects on different aspects of business enterprise, especially their effects on market competition. Narver her distinguishes among three main types of corporate merger: the horizontal, involving firms that produce generally similar items; the vertical, involving a successive (e.g. supplier-customer) relationship between firms and the conglomerate, involving any merger that is neither horizontal nor vertical. Economist have yet to agree on a general definition of the essential aspects of conglomerate mergers or on an adequate description of their effects on competition. the present book derives a precise meaning of conglomerate mergers by analyzing the legislative concern in the 1950 Amendment to Section 7 of the Clayton Act. The book then carefully considers the several factors in conglomerate merges that lead to their ability to affect competition. Most importantly, this analysis suggests under what conditions conglomerate mergers increase competition in a market and under what conditions they lessen it. With notable vigor and patience the author has pieced together various aspects of statistics on conglomerate merge activity, managerial behavior in a diversified firm, and market structure, and has produced the most useful analysis available on the competitive effects of conglomerate mergers. Not everyone will agre with its findings, but here can be no question that legislators, antitrust lawyers, economists, and business people will find them useful. Narver's book is timely because of wide concern with the current wave of mergers, appropriate public policy, and efficient private decision-making. Serval important conglomerate merger cases are now before the courts, and the public policy issues involved are still in the process of clarification. The analysis presented in this book should be important in the discussions of the next several years. This title is part of UC Press's Voices Revived program, which commemorates University of California Press's mission to seek out and cultivate the brightest minds and give them voice, reach, and impact. Drawing on a backlist dating to 1893, Voices Revived makes high-quality, peer-reviewed scholarship accessible once again using print-on-demand technology. This title was originally published in 1967.

John C. Narver is Professor Emeritus of Marketing at the University of Washington.