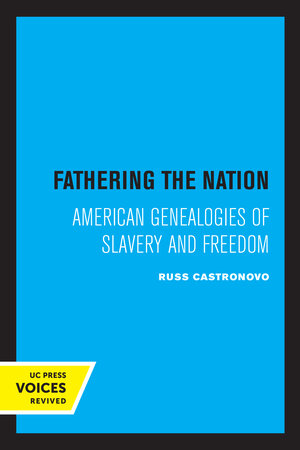 Fathering the Nation American Genealogies of Slavery and Freedom

Russ Castronovo underscores the inherent contradictions between America's founding principles of freedom and the reality of slavery in a book that probes mid-nineteenth-century representations of the founding fathers. He finds that rather than being coherent and consensual, narratives of nationhood are inconsistent, ambivalent, and ironic. He examines competing expressions of national memory in a wide range of mid-nineteenth-century artifacts: slave autobiography, classic American fiction, monumental architecture, myths of the Revolution, proslavery writing, and landscape painting. Castronovo theorizes a new American cultural studies which takes into consideration what Toni Morrison calls the "Africanist presence" that permeates American literature. He presents a genealogy that recovers those members of the national family whose status challenges the body politic and its history. The forgotten orphans in Melville's Moby-Dick and Israel Potter, the rebellious slaves in the work of Frederick Douglass and William Wells Brown, the citizens afflicted with amnesia in Lincoln's speeches, and the dispossessed sons in slave narratives all provide dissenting voices that provoke insurrectionary plots and counter-memories. Viewed here as a miscegenation of stories, the narrative of "America" resists being told of an intelligible story of uncontested descent. National identity rests not on rituals of consensus but on repressed legacies of parricide and rebellion. This title is part of UC Press's Voices Revived program, which commemorates University of California Press's mission to seek out and cultivate the brightest minds and give them voice, reach, and impact. Drawing on a backlist dating to 1893, Voices Revived makes high-quality, peer-reviewed scholarship accessible once again using print-on-demand technology. This title was originally published in 1995.

Russ Castronovo is Professor of English at the University of Wisconsin.

"Adds a new dimension to the understanding of so-called classic Americanist texts and importantly complicates the account of their cultural transmission and historicization. Castronovo constructs an iconoclastic history comprised of the counter-memories and subjugated knowledges of figures whose stories were eclipsed by the nation's monumental history. His argument addresses the more inclusive questions associated with cultural studies."—Donald E. Pease, editor of Revisionary Interventions into the Americanist Canon "An exciting and precise articulation of how slavery disrupts both dominant and unauthorized narratives of national identity, thus casting our national story as inherently inconsistent, characterized not by wholeness but by divisions and ambivalences in both content and form. The lucidity and complexity of Castronovo's argument as it interweaves multiple themes and texts is very impressive."—Karen Sanchez-Eppler, author of Touching Liberty