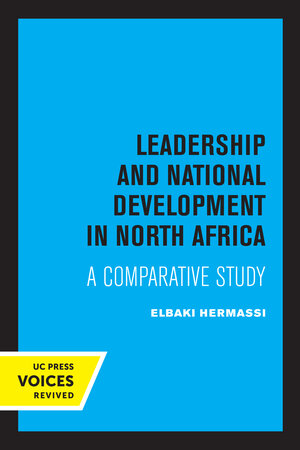 Leadership and National Development in North Africa A Comparative Study

This book considers the following questions in order to understand the Maghrib: Why is it that a civic polity has emerged only in Tunisia up to the present? Why is Algeria attaining a much higher rate of economic growth than its neighbors? Why does Morocco find itself in a political, economic, and cultural stalemate? Why are all Maghribi societies free from ethnic, cultural, and regional disintegration? And as such this title examines 1. the formations of Algeria, Morocco and Tunisia as distinct national societies; 2. the patterns of colonial domination and colonial change; the way in which 1. and 2. have influenced Maghribi political institutions and their elites' postures toward the basic challenges to their nations; 4. finally, the strategies and costs of national choices, given the various politcal actors' structural contexts and their situational facilities. This title is part of UC Press's Voices Revived program, which commemorates University of California Press's mission to seek out and cultivate the brightest minds and give them voice, reach, and impact. Drawing on a backlist dating to 1893, Voices Revived makes high-quality, peer-reviewed scholarship accessible once again using print-on-demand technology. This title was originally published in 1972.

Elbaki Hermassi was Professor of Sociology at the University of California, Berkeley.

"A major contribution to the study of North Africa in particular and to developmental questions in general." --Middle East Journal "Rich in fascinating and extremely intelligent insights into the workings of Tunisian, Algerian and Moroccan societies, and many of Hermassi's theoretical assumptions will undoubtedly become common currency in discussions of North Africa's socio-political development." --Times Literary Supplement "Hermassi acquaints us--and he does this exceedingly well--with the historical processes which link, or may link, traditional feuds and internecine wars with the contemporary anti-colonial--and eventually anti-capitalists movement--as in Algeria . . . . a first-rate panorama of the struggles surrounding elite formation, first and second-phase governance and independence in the three maghribi states." --Annals