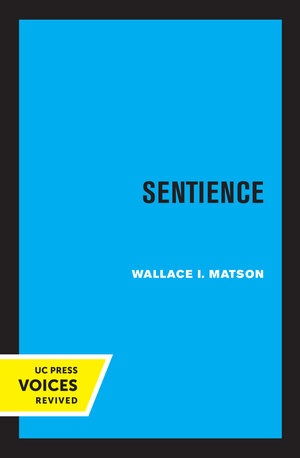 "Man need not be degraded to a machine by being denied to be a ghost in a machine," Gilbert Ryle has said. "He might, after all, be a sort of animal, namely a higher mammal. There has yet to be ventured the hazardous leap to the hypothesis that perhaps he is a man." Wallace Matson has made the venture. Even though he finds no valid objection to the conception of mind as nothing over and above functioning of the nervous system, he argues that nevertheless no existing or imagined machine models the nature of that function. Sentience is not just reception of information, bit is what he calls "sizing up" -- picking out of a situation those features that are more important, apperceiving the whole which they compose, relating to this while to the creature's interest, and deciding what to do about it. Matson shows how sizing up makes possible free action in the positive sense of action to which conscious deliberation makes a difference. This title is part of UC Press's Voices Revived program, which commemorates University of California Press's mission to seek out and cultivate the brightest minds and give them voice, reach, and impact. Drawing on a backlist dating to 1893, Voices Revived makes high-quality, peer-reviewed scholarship accessible once again using print-on-demand technology. This title was originally published in 1976.

Wallace Matson is Professor of Philosophy at the University of California, Berkeley.