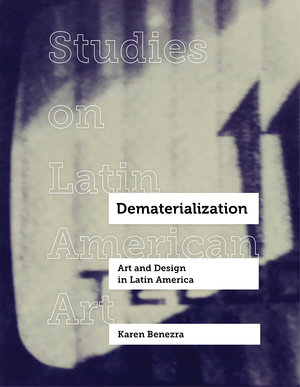 Dematerialization examines the intertwined experimental practices and critical discourses of art and industrial design in Argentina, Mexico, and Chile in the 1960s and 1970s. Provocative in nature, this book investigates the way that artists, critics, and designers considered the relationship between the crisis of the modernist concept of artistic medium and the radical social transformation brought about by the accelerated capitalist development of the preceding decades. Beginning with Oscar Masotta’s sui generis definition of the term, Karen Benezra proposes dematerialization as a concept that allows us to see how disputes over the materiality of the art and design object functioned in order to address questions concerning the role of appearance, myth, and ideology in the dynamic logic structuring social relations in contemporary discussions of aesthetics, artistic collectivism, and industrial design. Dematerialization brings new insights to the fields of contemporary art history, critical theory, and Latin American cultural studies.

Following the 2019 release of Abstract Crossings: Cultural Exchange between Argentina and Brazil by María Amalia García, University of California Press is pleased to announce two forthcoming titles in our Studies on …

Karen Benezra is Assistant Professor in the Department of Latin American and Iberian Cultures at Columbia University and an editor of ArtMargins.

"More than fifty years after Lucy Lippard and John Chandler published 'The Dematerialization of Art' in Art International, Karen Benezra has added significant insight to the phenomenon as it developed in Latin America. The author’s efforts are magnified by a search of the literature, which reveals that as it relates to Mexico, Argentina, and Chile, not a great deal has been written in English on this subject. While it is clear that art has pretty much continued to materialize, the importance of conceptual art and the profound place it occupies in the history of twentieth and twenty-first century art cannot be denied. Benezra’s close look at major figures, such as Oscar Masotta, Tomás Maldonado, Felipe Ehrenberg, and Gui Bonsiepe, each of whom contributed to this movement in 1960s and 1970s Latin America, is timely and welcome."—ARLIS/NA Reviews

"Karen Benezra offers, with impressive theoretical sophistication, new grounds for understanding the criticism, experimental art, and design practices in Argentina, Mexico, and Chile in the 1960s and 1970s. . . . [An]  impressively researched and argued study that uniquely brings together artists, authors, and designers to shed light on the role of aesthetics in transforming the social in a discussion that will be of interest to art historians, critics, designers, philosophers, and cyberneticians."—caa.reviews

"Dematerialization: Art and Design in Latin America is a provocative and refreshing book both methodologically speaking and in terms of its content. Offering new directions for thinking about art and design ... in the context of advanced capitalism, Dematerialization is of interest to the fields of contemporary art history, critical theory, and cultural studies in Latin America." (translation).

"Dematerialization proposes new grounds for exploring an increasingly broad array of artworks that have at different times been described as conceptual, non-objectual, idea-based, media and performative (among others). . . Benezra’s approach to the social and political importance of art during this period in Latin America avoids the pitfalls of prevailing and tired tropes surrounding political and social art."—Sehepunkte

"Dematerialization holds social relations, history, politics, and the ontological status of art at its heart while recovering rich historical reflections on modernity from twentieth–century thinkers from Latin America."

"Highly insightful and theoretically sophisticated, Dematerialization presents an original perspective on how artists, designers, and critics working in Latin America sparked a far-reaching transformation in twentieth-century art."—Pedro Erber, author of Breaching the Frame: The Rise of Contemporary Art in Brazil and Japan

"Approaching dematerialization as an interpretative framework, this monograph is both a highly original critical study as well as an exploration of a transformative period in Latin American art, design, and criticism."—Claire F. Fox, author of Making Art Panamerican: Cultural Policy and the Cold War

"In Dematerialization, Karen Benezra breaks new ground by examining Latin American artists and critics who were concerned less with transformations of the art object itself and more with art’s capacity for reflecting on the social—and for generating social transformation. With laser-sharp focus, this smart, concise study pushes against broad brush applications of the label of 'dematerialization' and instead insists that specifically Latin American responses to late capitalism fundamentally foregrounded the question of art’s relationship to society."—Rachel Price, author of Planet/Cuba: Art, Culture, and the Future of the Island

2 To Reconcile Art and the People:
Paz on Duchamp

4 Cybersyn:
Style, Management, and the Object of Design