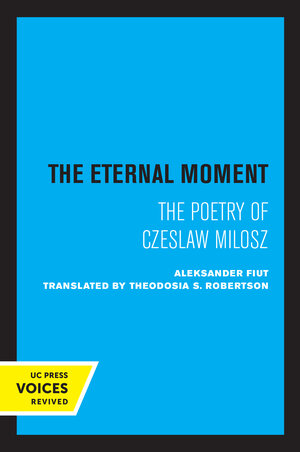 The Eternal Moment The Poetry of Czeslaw Milosz

Aleksander Fiut's study of the poetry of Nobel Laureate Czeslaw Milosz is the first comprehensive examination of the artistic and philosophical dimensions of this remarkable oeuvre. The author refutes such easy categorizations of Milosz as "the poet of Poland," "the poet of history," "the poet of the Holocaust." He examines instead such crucial problems as Milosz's search for the essence of human nature, irreducible to historical, social, and biological categories; Milosz's reflection on the erosion of the Christian imagination, which has resulted in a fundamental gap between the individual's inner life and the image of humanity formed by scientific theories; his efforts to rebuild the anthropocentric vision of the world, while acknowledging the elements that have undermined it; and finally, his attempt to recreate in his poetry a language that is both poetic and philosophical. The Eternal Moment originally appeared in Polish in 1987. This version, which quotes extensively from Milosz's Collected Poems, is the first thorough introduction for English-speaking readers to this major poet. This title is part of UC Press's Voices Revived program, which commemorates University of California Press's mission to seek out and cultivate the brightest minds and give them voice, reach, and impact. Drawing on a backlist dating to 1893, Voices Revived makes high-quality, peer-reviewed scholarship accessible once again using print-on-demand technology. This title was originally published in 1990.

Aleksander Fiut is Professor in the Centre for European Studies at Uniwersytet Jagiellonski. His Conversations with Czeslaw Milosz, co-edited with Ewa Czarnecka and widely translated, appeared in English in 1987. Theodosia S. Robertson is Associate Professor in History at the University of Michigan. She has translated widely in the area of Polish literature, including the Polish entries in the Columbia Dictionary of Modern European Literatures.