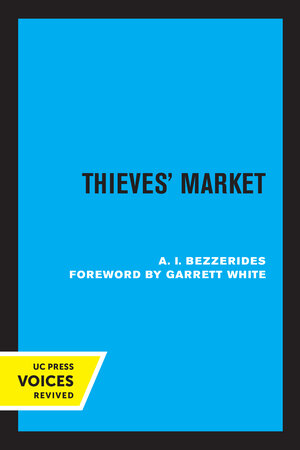 A dark, fast-paced proletarian novel originally published in 1949, Thieves' Market was written out of the author's youthful experiences as a trucker carrying produce to the packing houses of California's Central Valley. Immigrant Nick Garcos, like his father before him, becomes an independent trucker, soon landing in the brutal and crooked underworld of the produce markets of San Francisco, Oakland, Stockton, and Los Angeles. This title is part of UC Press's Voices Revived program, which commemorates University of California Press's mission to seek out and cultivate the brightest minds and give them voice, reach, and impact. Drawing on a backlist dating to 1893, Voices Revived makes high-quality, peer-reviewed scholarship accessible once again using print-on-demand technology. This title was originally published in 1949.

A. I. Bezzerides, the author of Long Haul, later filmed by Raoul Walsh as They Drive by Night, wrote screenplays for Warner Bros. in the 1940s as well as the film noir classics On Dangerous Ground, directed by Nicholas Ray, and Kiss Me Deadly, directed by Robert Aldrich. Thieves' Market was adapted by the author for a film, Thieves' Highway, directed by Jules Dassin. Garrett White is the translator of Blaise Cendrars's Hollywood.

"Bezzerides creates an exciting, suspenseful, and sometimes brutally grim picture of the truckers and wholesalers who worked in the California produce industry during the 1930s and 1940s. He evokes an entire culture of farmers, mechanics, roadside waitresses, prostitutes, and low-level racketeers. Most of all, he vividly portrays the bitter struggles of first or second generation Americans who try to escape their wage-earning status, only to encounter frustration, violence, and death." —James Naremore, author of Acting in the Cinema