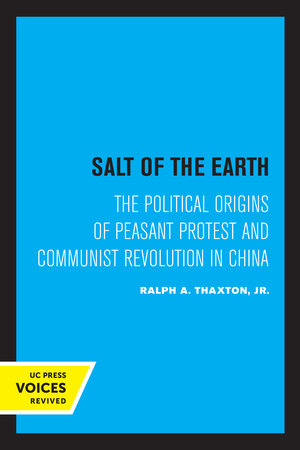 On October 1, 1949, a rural-based insurgency demolished the Nationalist government of Chiang-kai Shek and brought the Chinese Communists to national power. How did the Chinese Communists gain their mandate to rule the countryside? In this pathbreaking study, Ralph A. Thaxton, Jr., provides a fresh and strikingly original interpretation of the political and economic origins of the October revolution. Salt of the Earth is based on direct interviews with the village people whose individual and collective protest activities helped shape the nature and course of the Chinese revolution in the deep countryside. Focusing on the Party's relationship with locally esteemed non-Communist leaders, the author shows that the Party's role is best understood in terms of its intimate connections with local collective activism and with existing modes of local protest, both of which were the product of rural people acting on their own grievances, interests, and goals. The author's collection and use of oral histories—from the last remaining eyewitnesses—and written corroborative materials is a remarkable achievement; his new interpretation of why China's rural people supported and joined the Communists in their quest for state power is dramatically different from what has come before. This book will stimulate debates on the genesis of popular mobilization and the growth of insurgency for decades to come. This title is part of UC Press's Voices Revived program, which commemorates University of California Press's mission to seek out and cultivate the brightest minds and give them voice, reach, and impact. Drawing on a backlist dating to 1893, Voices Revived makes high-quality, peer-reviewed scholarship accessible once again using print-on-demand technology. This title was originally published in 1997.

Ralph A. Thaxton, Jr. is Professor of Politics at Brandeis University and author of China Turned Rightside Up: Revolutionary Legitimacy in the Peasant World.

"This original, important, and readable work offers a stimulating new interpretation of the Chinese Revolution and a mass of fresh, interesting evidence. Thaxton's argument breaks with conventional wisdom on a number of significant points and poses important challenges to all extant interpretations of the revolution as a whole. Thaxton's work explodes the simplistic dichotomies that have framed too many discussions of the Revolution itself and of the longer-term relationship between the CCP and the rural population. Salt of the Earth heralds a new post-Cold War era in our understanding of the Chinese Revolution."—Kenneth Pomeranz, author of The Making of a Hinterland "A most vivid and impressive contribution to a growing corpus of scholarly works on the various concrete ways in which the Chinese Communist Party was able to link itself to a rural 'mass base' in various areas of North China during the decades before 1949. Based on a judicious analysis of a vast body of oral history data drawn from interviews with peasants in three counties during the years 1985 and 1993, it sheds enormous light on the specific socioeconomic and cultural situation in one particular area while at the same time raising serious questions about both the Chinese Nationalist and Communist official histories of the period. Quite apart from its relevance to the general political history of China during those fateful years, it provides an amazingly vivid example of the possibility of doing local rural history in a way that brings alive the abstractions of socioeconomic and cultural history."—Benjamin Schwartz, author of Chinese Communism and the Rise of Mao